Update Required To play the media you will need to either update your browser to a recent version or update your Flash plugin.
By VOA
28 April, 2014

The United Nations reports that more than 3.3 million people are now experiencing food insecurity in Sudan. That number is expected to rise in the next several month to 4 million. About 11 percent of the country's estimated 34 million people would be affected by the rise.

The U.N. Food and Agriculture Agency(FAO) says fighting, displacement and poor harvests prevent many people from receiving food. Rosanne Marchesich represents the FAO in Sudan. She is shocked by the size of crisis. 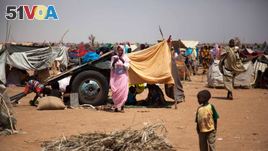 This photo taken March 9, 2014 and released by the United Nations African Union Mission in Darfur (UNAMID) shows a family at the Kalma refugee camp for internally displaced people, south of the Darfur town of Nyala, Sudan.

Ms Marchesich says Sudan is facing – what she calls – an early lean season.

"When the harvest is finished and the amount of locally available food is diminished. That's what the lean season is,"said  Marchesich.

She says food support is needed in millions of Sudanese homes for several reasons. She notes the conflicts in Blue Nile and Southern Kordofan States, and especially in Darfur. Huge numbers of people have fled the violence. About 380,000 people were displaced in 2013.

Ms Marchesich says, already this year, 280,000 people have fled their home in Darfur. Also, permanent and traveling planters and animal farmers sometimes fight for resources. And weather can be a major barrier to food security. Long extremely dry periods are followed by floods.

"So, it's really a human disaster and natural disaster – a combination of the two," said  Marchesich.

Low food supplies in parts of Sudan have caused a sudden rise in food prices. Meat price, for example, are up 45 percent. Vegetable prices have risen by 40 percent. In addition, the cost of transporting food has increased by 70 percent. Conflict in neighboring South Sudan makes the food situation more difficult. Refugees continue to cross the border and enter camps in Sudan.

The FAO official says it is very important to continue to provide these people with seeds and farm supplies. Help is also needed for communities around the camps, and for the refugees who return home.

"And they're returning to nothing. So these people need to have seeds and tools so that they can plant and have a harvest," said  Marchesich.