Update Required To play the media you will need to either update your browser to a recent version or update your Flash plugin.
By Alice Bryant
19 September, 2016


World leaders will gather at United Nations headquarters in New York this week for the yearly meetings of the U.N. General Assembly.

The leaders have been invited to a special summit on refugees and economic migrants. They will discuss ways to improve the international community's reaction to the growing number of refugees and migrants worldwide.

The world's refugee crisis is now as bad as it was during World War II, according to The New York Times newspaper.

The leaders are expected to talk about access to education for refugee children. When families flee from countries because of war or political insecurity, the children leave behind not only their homes but, in many cases, their education.

That is the subject of a new report from the United Nations refugee agency.

The report says that 3.7 million children under the U.N. agency's mandate are unable to attend school. The situation gets worse as the children get older. The percentage drops from 50 percent for young children to 22 percent at secondary school age.

U.N. information also shows that only one percent of refugees attend a university, compared to 34 percent of the world's population. 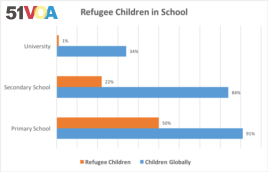 Filippo Grandi is the U.N. High Commissioner for Refugees. In a statement, he said that refugee education is, too often, terribly ignored. Grandi also said he would like to change that.

In his words, education is "one of the few opportunities we have to transform and build the next generation" of refugees so that they can improve the futures of the many millions of forcibly displaced people.

The issue of providing refugees with an education is more difficult because of the expanding population and a lack of necessary financing.

According to the U.N. report, the population of school-age children grew by 30 percent in 2014. That number requires an extra 20,000 teachers.

Many host nations already struggle to provide simple, but necessary services for refugees. But now, they must also find a place to hold classes and a way to purchase additional school supplies.

Often, the children struggle in their studies after missing several years of school and do not speak the local language.

"As the international community considers how best to deal with the refugee crisis, it is essential that we think beyond basic survival," Grandi said.

"Education enables refugees to positively shape the future of both their countries of asylum and their home countries when they one day return."

Refugees from Syria, for example, have been in the news as the Syrian conflict continues for a sixth year. Countries from Turkey to those across Europe must decide what to do to assist the families that have fled the fighting.

The U.N. refugee agency says there are about 1.7 million Syrian refugees who should be in school; however, 900,000 of them are not.

The agency has asked international donors for $4.54 billion this year to aid Syrian refugees. Financing for education involves $662 million of that request. As of June, the U.N. had collected only 39 percent of that total.

In 2015, most of the donations for this education program arrived in the final two months of the year. U.N. officials said this hurt the ability of host countries to make effective long-term plans for schooling.

The U.N. is asking donors to provide dependable funding over many years to help those countries better plan for providing teachers and supplies. It also urges the host governments to include refugees in their national education systems instead of separate schools. Those schools cannot easily be supervised in the same way to guarantee their effectiveness.

The new report discusses the helpful effects of education, saying it helps children avoid child labor and membership in armed groups. It also said that not providing schooling only extends conflict and leads to more people being displaced.

"There is solid evidence that quality education gives children a place of safety and can also reduce child marriage, child labor, exploitative and dangerous work, and teenage pregnancy," the report says.

Chris Hannas wrote this story for VOANews. Alice Bryant adapted it for Learning English. George Grow was the editor.

transform – v. to change (something) completely and usually in a good way

forcibly displaced – this phrase describes people who are forced to leave their homes, often because of war or political unrest

host – adj. In the context of this story, the word "host" describes countries that receive refugees. Sometimes we say "host countries" or "host nations." Other times, we may say "host governments."

enable – v. to make (someone or something) able to do or to be something

long-term – adj. lasting for, relating to, or involving a long period of time

exploitative – adj. a word describing work that uses (someone or something) in a way that helps someone else unfairly

Are there refugees in your country? Do the children attend regular schools or separate schools? Are the children able to attend school? We want to hear from you. Write to us in the Comments Section.