Millions Unemployed as Central Bank Warns US in 'Recession'

Update Required To play the media you will need to either update your browser to a recent version or update your Flash plugin.
By Susan Shand
26 March 2020

That is a record number for one week, the U.S. Labor Department reported Thursday. The old record had been 695,000 from 1982.

This is the beginning of the really bad numbers we are going to see for the next few months, said Subadra Rajappa. She is head of U.S. Rates Strategy at Societe Generale in New York City. 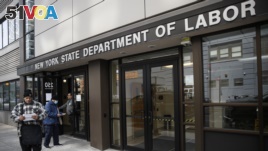 FILE - Visitors to the Department of Labor are turned away at the door by personnel due to closures over coronavirus concerns on March 18, 2020, in New York.

Also on Thursday, the chairman of the Federal Reserve, Jerome Powell, told NBC television that "the U.S. may already be in recession," as many companies have suspended operations. Schools, movie theaters and other businesses have closed as Americans turn to social distancing to slow the growth of coronavirus.

The central bank chair added that progress in controlling the spread of the coronavirus will decide when the economy can fully reopen.

Wednesday night, the U.S. Senate approved a $2 trillion bill to help people and businesses during the coronavirus pandemic. The measure is the largest stimulus bill in American history. The House of Representatives is expected to pass it on Friday.

Once signed into law, it will provide direct payments to many Americans as well as provide money to businesses that are hurting.

Lawmakers hope the bill will prevent the economy from heading into a long economic depression, such as the one the United States experienced in the 1930s.

U.S. President Donald Trump said this week that he would like to see Americans go back to work by Easter, April 12. He suggested that efforts to slow the virus may no longer be needed at that date. However, several companies and business groups are listening to health officials who say Americans need to stay home for a much longer amount of time.

"We urge all businesses and the public to listen to public health officials when it comes to social distancing," says Neil Bradley of the U.S. Chamber of Commerce.

But some business leaders agree with the president. Former Goldman Sachs Chief Executive Officer Lloyd Blankenfein wrote: "Crushing the economy, jobs and morale is also a health issue." His comments appeared on Twitter.

The Ford Motor Company announced Thursday it will open its factories as early as April 6. Ford said it will include "new safety measures" for its workers.

In Europe, government officials and industry leaders are still discussing the need for a full shutdown. Italy, which has the most coronavirus deaths of any country, is adding new restrictions. French President Emmanuel Macron has urged some workers to continue reporting to work. Spain is in a complete shut down. The country has the second largest number of deaths from the virus, more than 4,000.

In China, economic conditions are just beginning to improve.

In the United States, New York City is now the epicenter of the virus. New York has more than 17,000 confirmed coronavirus cases. Hospitals in the city are running out of room to store the bodies of the dead, one worker told news organizations.

New York State Governor Andrew Cuomo said Wednesday the peak of the infection is still about three weeks away. He said he expects as many as 140,000 cases and nearly 40,000 people will need hospitalization.

The Associated Press and the Reuters News Agency reported this story. Susan Shand adapted it for Learning English. George Grow was the editor.

strategy - n. a plan or system to accomplish something

stimulus - n. to inject money into an economy

shutdown - n. closing down a society, company or organization