Update Required To play the media you will need to either update your browser to a recent version or update your Flash plugin.
By VOA
28 June, 2014

Hollywood has made many movies about mind control. Movies like "The Matrix" and "Inception" are about the outside world controlling the mind of the individual.

But what if we change that around? What if the story is about a person who is able to use their mind to control the world around them – about people controlling robots using only their thoughts? The best part is this is not a Hollywood movie. This is real.

Our story today is about scientists who are creating technology that is helping people who have lost the use of their arms or legs by using the most complex computer known to man – the human brain.

Here is June Simms to tell the story of "mind over matter."

Cathy Hutchinson is a tetraplegic. She has not been able to move her arms, legs or speak since suffering a stroke nearly fifteen years ago. Recently, she learned how to control a robotic arm using her thoughts. She now can use brain activity to serve herself a drink. 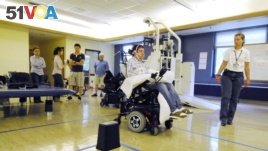 Paralyzed patient steers a wheelchair using his tongue. Perhaps in the not-too-distant future he will be able to drive it using his thoughts.

The American woman took part in a research project known as BrainGate2. The researchers have spent years studying how to help people who are paralyzed regain movement in their arms and legs.

John Donoghue is a neuroscientist with Brown University and the Department of Veterans Affairs. He also was part of the project.

JOHN DONOGHUE: "People who are paralyzed have their brain disconnected from their body. So they are not able to go out and do everyday things that you and I can do, like reach for a glass of water or scratch your nose. So our idea is to bypass that damaged nervous system and go directly from the brain to the outside world so the brain signals can, not control muscle, but control machines or devices like a computer or a robotic limb."

The two paralyzed people had small sensors connected to the part of the brain that controls movement. The devices measured brain activity and sent that information to a computer.

The computer has special software that turns the information into digital commands for operating other devices. The researchers used a highly developed robotic arm to recreate human actions.

The BrainGate team had its first success in two thousand six. A tetraplegic stabbing victim was able use the brain-computer interface system to control a computer cursor. John Donoghue says the latest development using robotic arms is a major victory.

A video of the latest experiment shows Cathy Hutchinson using the robotic arm to pick up a cup of coffee. She guides the cup toward her mouth, moves it forward and drinks through a straw.

Lead investigator Leigh Hochberg says the first time she did it was a magical moment.

LEIGH HOCHBERG: "To see her with that robotic arm reach out and pick up that cup of coffee and serve herself that coffee for the first time in nearly fifteen years, it was an incredible moment."

The research team carried out almost two hundred tests with two different robotic arms. The two individuals were able to pick up their target objects forty-three to sixty-six percent of the time.

The researchers are calling the information very promising. But they say it will take years to fully develop the technology for everyday use.

Thanks, June. And I'm Anna Matteo.

Share your thought about mind control or practice with the expressions "low-tech" and "high-tech" in our comment section where you can practice your written English.