Minister: Pakistan Could Block US Supply Lines to Afghanistan

Update Required To play the media you will need to either update your browser to a recent version or update your Flash plugin.
By Bryan Lynn
31 May, 2018


A Pakistani official says his country may block supply lines into Afghanistan if relations with the United States do not improve.

In an interview with VOA, Foreign Minister Khurram Dastgir Khan said the U.S. and Pakistan are currently "not speaking to each other." Relations have worsened to a point where direct, high-level contacts are no longer happening, he said.

Besides being the country's top diplomat, Khan also serves as Pakistan's defense minister. He blames the current state of ties on a lack of communication by the U.S. administration.

Khan criticized the U.S. for urging that Pakistan be placed on an international terrorism-financing watch list. The list is made by the Financial Task Force, or FATF, which is based in Paris. The group decided in February to include Pakistan on its "gray list" of nations it sees as not doing enough to reduce the financing of terrorism.

Pakistan is required under an agreement with the FATF to work on an action plan to get itself removed from the list. If no progress is made, the country faces the possibility of being moved to the organization's more severe "black list" of nations.

Pakistan denies it supports any terrorist groups. Pakistani officials say any U.S. moves to pressure the country are an attempt to blame Pakistan for international failures to end the Afghan war.

Khan says Pakistan is officially still a major non-NATO ally of the United States. The U.S. has cooperated with Pakistan on military matters although Pakistan is not a member of NATO, the North Atlantic Treaty Organization. The military alliance includes the U.S. and 28 nations from North America and Europe.

Khan noted that Pakistan has kept its ground and air lines open for American and allied nations transporting supplies to troops in Afghanistan.

But when asked whether the supply lines would remain open, Khan said Pakistan may have to "rethink" this cooperation. 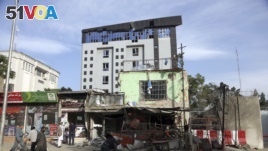 An Afghan police officer sweeps blood on a road in Kabul, Afghanistan, Thursday, May 10, 2018, a day after a deadly suicide attack in which suicide bombers struck two police stations in Kabul. (AP Photo/Rahmat Gul)

"Yes, we have to consider all options that are in front of us," he said. "Because it would appear to us that the U.S. is following what can be termed a non-violent compellence of Pakistan."

International forces heavily depend on Pakistani territory to transport supplies. Pakistan closed the supply lines one time before. That was after a U.S. airstrike in 2011 mistakenly killed a group of Pakistani soldiers.

The action forced the U.S. and NATO for months to transport supplies through other areas by land and sea. The forces then used what came to be called the Northern Distribution Network, which runs through other countries, including Russia.

But military experts say this may not be possible again if Pakistan decided to block the supply lines. Current tense relations between the U.S. and Russia would likely prevent it, they said.

Ayaz Gul reported this story for VOA News. Bryan Lynn adapted it for Learning English. Mario Ritter was the editor.

vilify – v. to say or write very harsh and critical things about

option – n. the opportunity or ability to choose something or to choose between two or more things

compellence – (not standard usage) n. the ability of one state to convince another state into action, usually by threatening punishment