Update Required To play the media you will need to either update your browser to a recent version or update your Flash plugin.
By VOA
30 June, 2014

An area known as a dead zone develops every spring in the Gulf of Mexico near the mouth of the Mississippi River. It can spread as much as 13,600 square kilometers, extending all the way to the eastern Texas coast. Scientists know what causes the dead zone -- too much nitrogen, but the solution might be hard to accept.

Bayani Cardenas is a professor of water studies at the University of Texas at Austin. He says the movement of rivers usually removes material like nitrates. So he wondered why that natural filtration process does not remove nitrates from the Mississippi River. 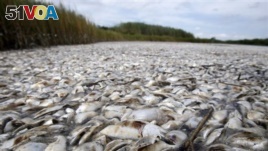 Dead pogies float in a fish kill in a pass near Bay Joe Wise on the Louisiana coast, Thursday, Sept. 16, 2010.

Professor Cardenas says his recent study shows that more than 99 percent of the river's water does pass through the river's sediment which is on the shore or bottom of the river. But he says the study found that there is so much nitrogen in the river system that is simply can not filter all of it.

The water that has nitrogen still in it supports the growth of algae. As the algae dies, it sinks to the bottom of the river where it breaks down or decomposes. It then takes oxygen from the water. This condition is called hypoxia and it is deadly to fish and shrimp.

Where does all this nitrogen come from? The answer is farms. The Mississippi River system carries water from 33 American states and part of Canada to the gulf of Mexico. Along the way nitrogen and other chemicals used in farming enter the system. Farmers say these chemicals must be used to produce enough food for a growing world population.

Aaron Packman is a professor of Civil and Environmental Engineering at Northwestern University. He says farmers may be able to better control the amount of nitrate fertilizer they put on fields.

"How much fertilizer do you need to give you good yields and then how much is maybe a marginal gain from adding lots more fertilizer? There is really a question here: can you maybe [reduce the amount] and get close to the same level of yield without having such a negative impact?" said Packman.

The water in the Mississippi River system should be able to clean itself naturally as it flows down stream. But flood controls and other human-made structures have hurt this filtering process.

Storms in the next few month will mix the gulf water and the dead zone will disappear, but it will return next year. And scientists say it will grow larger in years to come, if something is not done to reduce the amount of nitrogen in the Mississippi River.