Update Required To play the media you will need to either update your browser to a recent version or update your Flash plugin.
By VOA
27 July, 2014
51VOA听写整理，转载请注明出处。文本仅供参考，欢迎纠错！

During the Muslim holy month of Ramadan, Muslims are not supposed to eat or drink anything all day. This is called fasting. People with diabetes can become sick when they fast. Now some African diabetes patients can receive help with their health before, during and after Ramadan.

Senegal has become the first French speaking country in Africa to use a wireless phone application, called mRamadan. The new application or app sends free text messages everyday with fasting advice for diabetics. 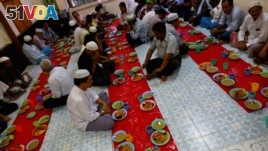 Muslims pray before iftar, or the breaking of fast meal, during the holy fasting month of Ramadan at a mosque, July 1, 2014.

The mRamadan app is part of the Be He@lthy Be Mobile campaign, from the World Health Organization and the International Telecommunication Union. The campaign goal is to reduce the large number of emergency hospital visits during Ramadan.

Diabetics who are testing the new app say it has been quite helpful. Like 26 year-old Marie Gadio, she found out she had diabetes when she was 13. She says living with diabetes during Ramadan is not easy.

"Certain diabetics just fast as they want, without knowing anything, but now our technology is developing and people can take advice from this program," Gadio said.

There are exceptions to the rule about fasting during Ramadan. The very young and old do not have to fast. Pregnant women and people with poor health often are permitted to eat during the day. But many diabetics say they do try to fast during Ramadan. They also sometimes stop taking insulin, a medicine used to control blood sugar levels.

"The first risk is hypoglycemia, which can be very harmful for the brain, in particular. There is also a risk of hyperglycemia, because when they fast, their diabetes is less controlled. They cannot take their medication on a regular basis. And this is a risk..." Mbaye said.

Dr. Mbaye says diabetics are also at an increased risk of dehydration, which is sickness from a lack of water. She says that all diabetics should talk with their doctors before deciding if it is safe not to eat and drink.

Some of the mRamadan messages remind people to drink at least one liter of water each morning before beginning the fast. Other messages tell how to make changes to medication use. The advice also advises diabetics not to eat too many sugary foods during the breaks in fasting.