For hundreds of years, Africans have preserved their history through storytelling. But, some Africans worry that oral traditions will be lost to Internet connections and social media.

This has led one Nigerian woman to create a mobile phone application, or app, as a way to preserve African folk stories. Elizabeth Kperrun is a businesswoman and fashion designer. She calls her mobile app AfroTalez. The AfroTalez app tells children's stories that teach moral lessons. Ms. Kperrun says she wanted to create the app to preserve some of the stories told to her when she was a child in Nigeria.

"Sometimes you can't teach a child something by telling the child, ‘Don't do this'. In fact, I think it gave me context. In a story somebody stole something and then something bad happened to them. Alternatively, somebody else did something good and they ended up really happy or really rich，" Kperrun said. 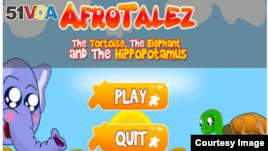 Elizabeth Kperrun says she learned life lessons from the folk stories she heard as a child, a tradition she says should be kept alive. Her AfroTalez app, for children ages 2 to 10, features a narrated story, full-screen animation, directions and quizzes.

"Hello children. My name is Liz and I'd like to tell you a story about a tortoise, an elephant, and a hippopotamus."

The voice of "Aunt Liz" narrates the story, while a full-screen animation appears. An arrow signals when it is time to move on. There are also quizzes on object recognition and counting throughout.

Kperrun spoke to her older relatives to help collect stories for the application. The stories come from an ethnic group of about four million people called the Tiv who live in southeast Nigeria and northwest Cameroon. Ms. Kperrun says she wants to include folktales from other parts of Nigeria in local languages in those areas.

"I want to keep it centered around folk stories. I don't want the popular ones that, let's say, Walt Disney has made really really popular... I think it's only fair and respectful that we keep certain cultures alive because most of the folk stories are part of the tapestry that keeps cultures together，" Kperrun said.

AfroTalez is available for Android users and can be downloaded for free in the Google Play store. So far, AfroTalez has more than 50,000 users.

Funding for the app has been a major challenge. Ms. Kperrun hopes to use a crowdfunding campaign to help fund the next version of AfroTalez to be released this year.

Ms. Kperrun says technology does not have to destroy or replace traditions. She says her goal is to combine both new technology and old traditions to keep African culture alive.

"Africa is our home. I think we are so in a rush to become Western that we are forgetting things that are really really important, things that should be passed on of who we are, and I don't think that's right."

animation – n. a way of making a movie by using a series of drawings, computer graphics, or photographs of objects that are slightly different from one another, and that when viewed quickly one after another, create the appearance of movement

crowdfunding – n. the practice of getting money from a large number of people, especially from the online community

preserve – v. to keep something safe from harm or loss; to protect