Model Villages Are a Holiday Tradition

Update Required To play the media you will need to either update your browser to a recent version or update your Flash plugin.
By John Russell
11 December 2022

This season, American designers and creative people give advice on how to create your own small winter villages. 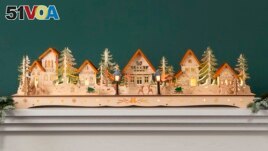 This image provided by Balsam Hill shows their Christmas Mantel Village. The village is crafted of plywood and hand painted. With built-in lights, it's a charming Victorian-era decoration for mantels, windows or tabletops. (Balsam Hill via AP)

Dayna Isom Johnson is an expert on the crafts site Etsy.com. She said nostalgia – pleasure in remembering something from the past – is an important part of holiday decorations this year.

"So it's no surprise that tiny Christmas villages are trending," she added. Trending means becoming popular.

"From...snowy layers to modern ceramics with clean lines, families are putting their creative spin on this...tradition," she said.

Models of little villages from the 1800s came to America with European immigrants. They were popularized even more by F.W. Woolworth, who sold very small, German-made cardboard houses.

In the 1970s and 1980s, ceramic houses became popular. The company Department 56 began making theirs in 1976 and still do today.

Making your own village

Robin Zachary has a large collection of objects used to make model villages. They include things like cardboard houses, matchbox cars, bottlebrush trees and little people. She likes to set up a model village for the holidays in her New York City home.

She advises people interested in making their own villages to consider model train shops. "The scale is perfect for a holiday village..." she said.

Sarah Fishburne is the director of trend and design for the company Home Depot. She said it is a good idea to put small Christmas villages on top of fireplaces or side tables.

"You could also place one on the floor surrounding your Christmas tree, or distribute your pieces throughout a bookcase," she said.

If you are making a Christmas village yourself, Fishburne said, get everybody in the family involved.

You can find sets of wood and cardboard small houses online. You can add the paint and other decorative elements. Some will fit nicely over a light to shine in the evenings.

Kelly Mandell is a blogger in Los Angeles. She turned birdhouses into a modern holiday village using special paint and a shiny material called glitter. Snow and colorful trees added to the playful feeling.

You might even include village elements into the branches of a wreath, Fishburne suggests. Americans sometimes put circles of evergreen tree branches called wreathes on their doors.

Beyond the traditional look, Fishburne recommends creating something that shows your family's favorite activities. Are you all ice skaters? Do you love to bake? Is a visit to grandparents something you do during the holidays? You could show these things in your model village along with things that bring good memories.

Or you could take ideas from the places you have visited in your travels. Fishburne said her family always brings home a little building or other small object from a place they have traveled to.

Finally, if there's no space for a large village, Zachary suggests a different kind of family craft project: a village painting.

"Why not have the kids draw and decorate houses, then pin them up in a row on the wall? Make sure they make some trees, as well as any of your town's significant buildings," she says.

Kim Cook reported on this story for the Associated Press. John Russell adapted it for VOA Learning English.

craft – n. an activity that involves making something in a skillful way by using your hands

trending –adj. describing something that is currently popular or appearing on social media

ceramic – n. made of clay that has been heated to a very high temperature so that it becomes hard

spin – n. a certain way of describing or talking about something that is meant to influence other people's opinion of it

scale –n. the size relationship that one thing has to another (usually similar) thing