Update Required To play the media you will need to either update your browser to a recent version or update your Flash plugin.
By John Russell
04 November 2021


Imagine you are learning about a science. Perhaps you want to read a science book, science news, or scientific research in English.

There are certain structures that are common to all of these kinds of writing. 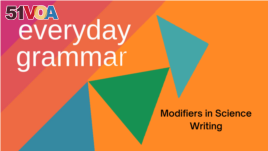 Let's start with a few important terms and ideas.

Modifiers can appear before or after a noun.

A noun and its modifiers can create a noun phrase – a group of words that acts like a noun in a sentence.

Modifiers can also come after a noun. Imagine you read a science story that says something like this:

In the example, the noun evidence is followed by a kind of modifier known as a prepositional phrase – the words of a large black hole.

In speaking, noun phrases commonly only have a noun, pronoun, or noun and determiner – a word such as the, this, a, and so on. So, you might hear someone say:

I called my friend.

In the example, the noun phrase is my friend. It has the noun, friend, and the determiner, my.

In writing, noun phrases are more likely to have modifiers that come before and after the noun. These modifiers are often more complex than what you hear in everyday speaking.

Writing and modifiers in science news

Let's explore some science stories that have appeared recently on VOA Learning English's website. You will see that modifiers play an important part in giving information about scientific studies.

For example, here is one story that reports findings from a study. The study used a high-tech sensing device known as lidar.

A careful study of a large area in Mexico has found hundreds of ancient ceremonial centers.

The important noun is the word study. It forms the base of the sentence's subject. If the modifiers were taken out of the first part of the sentence, it would be this:

A study has found hundreds of ancient ceremonial centers.

Note that the sentence is still complete. Some of the details have been removed, but the sentence still has the elements of a complete sentence – subject, verb, object.

Note that the modifiers in the original report come both before and after nouns.

A careful study of a large area in Mexico ...

The adjective careful comes before the noun study. The phrase of a large area comes after study, and the phrase in Mexico comes after the noun area.

Let's see how modifiers play an important part in another science story.

Astronomers say they have found evidence for the first time of a planet orbiting a star outside our Milky Way galaxy.

Notice here that the subject of the sentence is very short – astronomers. But modifiers play an important part in the sentence's predicate.

The noun evidence is followed by the modifier for the first time, which is in turn followed by more modifiers - of a planet... and so on.

One way to think about the central idea of today's report is to imagine a skeleton – the bones that make up the basic structure of a person or animal.

On top of the basic structure there are increasing levels of complexity that create a living being – fat, nerves, muscles, blood vessels, and so on.

In grammar, we have a basic structure that makes up the central meaning of a sentence - subject and predicate, noun or noun phrase and verb. Modifiers add weight or detail to the basic structure. The modifiers bring sentences to life.

The next time you are reading science news, scientific research, or really any kind of writing in English, pay careful attention to how the writer uses modifiers. Identify the basic structure of a sentence and then make note of how modifiers play a part in it.

participle – n. grammar : a form of a verb that is used to indicate a past or present action and that can also be used like an adjective

prepositional phrase – n. grammar : a phrase that begins with a preposition and ends in a noun, pronoun, or noun phrase