Update Required To play the media you will need to either update your browser to a recent version or update your Flash plugin.
By Jill Robbins
20 May 2021


In the U.S. House of Representatives on January 4, 2021, Representative Emanuel Cleaver of Missouri closed a prayer to mark the swearing in of the 117th Congress. He changed the traditional "amen" and instead, said "amen and awoman."

"Amen" contains the sound "men" but it is not connected to the English word "men," meaning adult males. The -men from "amen" is from a Hebrew word meaning "truth." The word is used at the end of a prayer to signify agreement with the prayer's message. But it also can be used to show agreement to the truth of any statement.

The representative's words show the desire among the members of Congress to use gender-inclusive language. He may have thought the word "amen" excluded women, and changed it in the same way we would say, "men and women of the military." 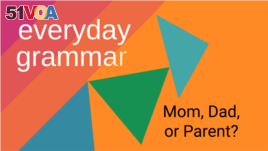 English does not use grammatical gender. Our words, however, do often speak directly to biological gender, a state of being either female or male. In America, increasingly, people are seeking to avoid language based in biological gender.

The House Committee on Rules announced rules for the new Congress in January. The new rules demanded language changes to avoid terms considered sexist or discriminatory in other ways. The Rules committee explained that their goal in writing the new rules is to include all those who work with Congress and their families, including those who are nonbinary, identifying as neither male nor female. The words they chose to avoid include such words as "father, mother, son, daughter, brother, sister, uncle, aunt ... nephew, niece, husband, wife, ... grandson, or grand-daughter." Instead, the rule calls for using ‘‘parent, child, sibling, parent's sibling, ... sibling's child, spouse, ... or grandchild".

These guidelines only restrict Congress' documented language. The use of "gendered" words in speech is not part of the new rules.

"I stand before you as a wife, a mother, a grandmother, a daughter," Pelosi said. "A daughter whose father proudly served in this Congress."

The new House Rules also identified words to be used in connection with job or occupational positions. For example, the leader of a committee will be described as the Chair. Words such as "member" or "delegate" replace the pronouns "she" and "he." And, "herself" or "himself" is replaced by ‘‘themself."

Colin Surname, a singer and songwriter who lives in Britain, has written a song to teach us about using the singular pronoun, "they."

Singular 'they' is really easy;

Singular 'they' is here to stay.

It's been around since 1350 and it's a word you already say.

So you refer to them as 'they.'

I just did it when I said "them" then

What a convenient display

You can read more about the use of "they" in our previous stories:

Problems with Pronouns and Gender

'They' Wins as Linguists' Word of the Year

Words of the Year: ‘They,' ‘Existential,' ‘Climate Emergency'

Jill Robbins wrote this lesson for Learning English. Caty Weaver was the editor.

masculine – adj. of, relating to, or suited to men or boys

feminine – adj. of, relating to, or suited to women or girls

impeach – v. to charge (a public official) with a crime done while in office

How do you change your language to honor the different gender identities of those around you? We want to hear from you. Write to us in the Comments Section.