Update Required To play the media you will need to either update your browser to a recent version or update your Flash plugin.
By Jill Moss
14 September, 2013

I think people everywhere dream about having lots of money. I know I do. I would give anything to make money "hand over fist." I would like to earn large amounts of money. You could win a large amount of money in the United States through lotteries. People pay money for tickets with numbers. If your combination of numbers is chosen, you win a huge amount of money -- often in the millions. Winning the lottery is "a windfall." 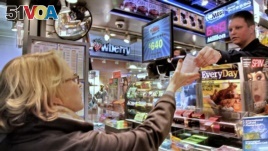 Millions of people dream of winning the lottery.
A few years ago, my friend Al won the lottery. It changed his life. He did not have a rich family -- he was not "born with a silver spoon in his mouth." Instead, my friend was always "hard up for cash" -- he did not have much money. And the money he did earn was chicken feed -- very little.

Sometimes Al even had to accept hand-outs -- gifts from his family and friends. But do not get me wrong. My friend was not a deadbeat. He was not the kind of person who never paid the money he owed. He simply pinched pennies. He was always very careful with the money he spent. In fact, he was often a cheapskate. He did not like to spend money. The worst times were when he was flat broke and had no money at all. 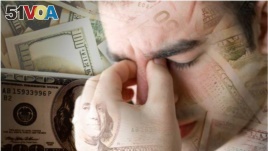 Mark (L) and Cindy (C) Hill are presented a check by a Missouri Lottery official during the announcement of Powerball winners in Dearborn, Missouri, November 30, 2012.
One day, Al scraped together a few dollars for a lottery ticket. He thought he would never strike it rich or gain lots of money unexpectedly. But his combination of numbers was chosen and he won the lottery. He hit the jackpot. He won a great deal of money.

Al was so excited. The first thing he did was buy a costly new car -- he splurged on the one thing that he normally would not buy. Then he started spending money on unnecessary things. He started to waste it. It was like he had "money to burn." He had more money than he needed and it was "burning a hole in his pocket," so he spent it quickly.

When we got together for a meal at a restaurant, Al paid every time. He would always "foot the bill" -- and pick up the tab. He told me the money made him feel like a million dollars. He was very happy.

But, Al spent too much money. Soon my friend was "down and out" again. He had no money left. He was back to being "strapped for cash." He had spent his "bottom dollar" -- his very last amount. He did not even "build up a nest egg" -- he had not saved any of the money.

I admit I do feel sorry for my friend. He had enough money to "live like a king." Instead, he is back to "living on a shoestring" -- a very low budget. Some might say he is "penny-wise and pound foolish" -- he was wise about small things, but not about important things.