Update Required To play the media you will need to either update your browser to a recent version or update your Flash plugin.
By Dan Friedell
23 May 2022


A top adviser to the World Health Organization (WHO) says the current monkeypox virus spread in Europe probably began at big dance parties in Spain and Belgium. The expert, Dr. David Heymann, says the virus most likely passed from one person to another through sexual activity at the events.

The WHO says there are at least 90 cases of monkeypox in Europe, Australia and North America.

Heymann is a professor of infectious disease spread at the London School of Hygiene and Tropical Medicine and former chief of health and security at the WHO. 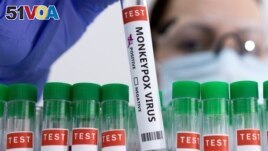 The monkeypox virus is usually found in West Africa but it has now been found in Europe, North America and Australia. Health experts believe it is being spread by close skin contact among people having sex. (REUTERS/Dado Ruvic/Illustration)

Denmark reported a first case of the disease on Monday. The WHO says there are more than 90 cases of monkeypox in 12 countries including Canada, Spain, Israel, France, Switzerland, the U.S. and Australia.

The top health leader in the Spanish capital, Madrid, said the city has 30 cases so far. Health officials are investigating a Gay Pride event attended by 80,000 people in the Canary Islands as a possible source of the outbreak. They are also investigating a gay-friendly business known as a sauna in Madrid. In Spain, a sauna is known as a place where gay men can go to have sex.

Most monkeypox patients experience a high temperature, pain around the body, and tiredness. More severe cases cause a raised rash and open skin wounds. It is not considered a sexually transmitted infection but close skin contact can cause spread. Most people get better in weeks and do not require hospitalization.

The WHO said the version of monkeypox in the current outbreak is similar to an outbreak detected in Great Britain, Nigeria, Israel and Singapore in 2018 and 2019. The WHO said it is less severe than past cases reported by countries in West Africa.

The agency said the wide spread of the virus is "highly unusual" and believes it may have been spreading without notice for a while.

The virus develops in the human body from about five days to three weeks after infection. Most people recover within about two to four weeks without needing to stay at a hospital.

Health officials in Great Britain said a large number of the cases are being seen in young men with no history of travel to Africa.

Heymann said it is possible there was one infected person who then spread it to others at a large event where they were in close contact with many people.

"There were these international events that seeded the outbreak around the world, into the U.S. and other European countries," he said.

He noted that monkeypox is not as worrisome as COVID-19 because it does not spread through the air. Heymann said it is important to slow down its spread "but we have vaccines to protect against it."

However, he noted there should be studies right away to find out if people who do not show signs of the virus can still spread it.

Dan Friedell adapted this story for VOA Learning English based on reporting by the Associated Press and Reuters.

amplify – v. to increase the strength of something

pride- n. a feeling that you respect yourself and deserve to be respected by other people

rash- n. spots on the skin usually caused by an illness or reaction to something

seed- v. to plant something in the ground so it grows or, in this case, to put an infection into the public and have it spread from person to person