Monkeys Cause Problems Around India's Capital

Update Required To play the media you will need to either update your browser to a recent version or update your Flash plugin.
By Alice Bryant
17 December, 2018


Monkeys have become a big problem around government offices in New Delhi, India.

Hundreds of macaque monkeys have been stealing food and mobile phones near parliament. They are also breaking into homes and frightening civil servants and the public.

"Very often, they snatch food from people as they are walking," said Ragini Sharma, a home ministry employee. She said the monkeys also sometimes climb through the office windows and destroy documents.

An advisory sent to members of parliament in November offered ways to stop monkey attacks. It suggested avoiding three things: teasing the monkeys, making eye contact with them, and getting between mother monkeys and their young.

Why is monkey-human conflict so common?

The fast growth of cities has reduced habitat for macaques, a species with the widest habitat reach in the world. This reduction has caused the animal to hunt for food where humans live and work.

In addition, macaques have a spiritual meaning in the Hindu religion. They are believed to be connected to the god-like creature Hanuman, who takes the form of a monkey. So, many people in India respect and feed macaques.

Ecology researcher Asmita Sengupta said that the tradition of feeding them has led to behavior problems in the monkeys.

She is with the Ashoka Trust for Research in Ecology and the Environment.

Because people feed them, they expect to be fed, Sengupta explained. So, when people stop feeding them, they become aggressive. 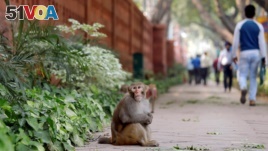 And some happenings between monkeys and humans have turned tragic. In 2007, monkeys pushed S.S. Bajwa out of his building to his death. Bajwa was then the deputy mayor of Delhi.

Last month in the city of Agra, home the the Taj Mahal, one of the animals snatched a 12-day-old boy from his mother and killed him.

Over time, India has tried many methods for fighting the growth of the monkey population. Several years ago, the country brought in langur monkeys, which are larger and feared by the macaques. But that stopped after keeping langurs in captivity became illegal.

Officials found a partly successful solution four years ago. They hired 40 men to dress as langurs and make monkey sounds to try to scare the macaques away.

"We call them ‘ape repellers' and they are contract employees," said a government official, who asked not to be identified. The method works temporarily as the monkeys flee on hearing the calls. But they return whenever the men leave.

S.M. Mohnot is chairman of the Primate Research Centre, a federal agency in the western city of Jodhpur.

He suggests three proposals: sterilizing the animals and moving them to forests, removing the ban on their capture for biomedical research and exporting the monkeys to other countries.

snatch – v. to take something suddenly from a person or place often by using force

tease – v. to annoy or bother an animal

ecology – n. a science that deals with the relationships between groups of living things and their environments

hire – v. to give work or a job to someone in exchange for wages or a salary

sterilize – v. to make a person or animal unable to produce children or young animals