Update Required To play the media you will need to either update your browser to a recent version or update your Flash plugin.
By Jill Robbins
28 April, 2016


Scientists believe a species of monkeys used a raft to cross 160 kilometers of ocean from South to North America about 21 million years ago.

The monkeys are similar to today's capuchins, small monkeys that often perform with humans at the circus.

Scientists found seven monkey teeth that became fossils in an area near the Panama Canal. The teeth were more than five million years old. Scientists think that is when the continents of North and South America came together. 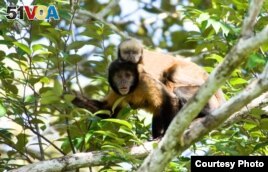 They said the teeth belonged to a species they call Panamacebus transitus. When the species lived, South America was not in contact with other continents.

For that reason, South America has a strange variety of mammals. The animals grew and changed in interesting ways because they were separated from other animals.

Jonathan Bloch works at the Florida Museum of Natural History on the University of Florida campus. He said that Panama was farther south than any other place in North America. He said the monkeys might have swum, but probably rode on some kind of a raft.

Bloch believes these monkeys were the only mammals that were able to cross the waterway from South America to reach present-day Panama.

The strip of land, known as the Isthmus of Panama, was formed about 3.5 million years ago. That land bridge permitted large numbers of animals to begin walking between the continents in one of the biggest mixing of species on record.

Bloch said learning that monkeys lived in North America that long ago was a surprising discovery. For a long time, scientists thought that monkeys simply did not exist there.

It would be like learning that Australia's kangaroos and koalas live in the wilds of Asia today.

This story is from the Reuters news service. The news first appeared in Nature magazine. Jill Robbins adapted this story for Learning English. Hai Do was the editor.

monkey - n. type of animal that is closely related to apes and humans and that has a long tail and usually lives in trees

fossil - n. something (such as a leaf, skeleton, or footprint) that is from a plant or animal which lived in ancient times and that you can see in some rocks

mammal - n. a type of animal that feeds milk to its young and that usually has hair or fur covering most of its skin

raft - n. a flat structure that is used for floating or sailing on water

sloth - n. a type of animal that lives in trees in South and Central America and that moves very slowly

kangaroo - n. an Australian animal that moves by hopping on its powerful rear legs

koala- n. an Australian animal that has thick gray fur, large hairy ears, sharp claws for climbing, and no tail

Now it's your turn. What do you think of this discovery? Write to us in the comments section.