Update Required To play the media you will need to either update your browser to a recent version or update your Flash plugin.
By Caty Weaver
24 April, 2015


Monkeys are entertaining. They can swing through trees, hang by their tails, play, dance, kiss and argue. A new Disney movie captures all of that and more.

The nature film "Monkey Kingdom" stars a group of monkeys that live among the ruins of the ancient city of Polonnaruwa in Sri Lanka. These small reddish-colored monkeys are known as toque macaque monkeys. They also follow an established social order.

"Monkey Kingdom" centers on Maya and her newborn, Kip. Maya is low on the social order among the monkeys. She struggles to find food and safety. That struggle increases when she has Kip. 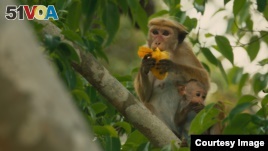 Maya and her newborn Kip in Disneynature's Monkey Kingdom. (&#169;Disneynature 2015)

Maya is a resourceful monkey. She fights for territory when other troops of monkeys try to invade her living area. The drama and danger is real.

Tina Fey narrated "Monkey Kingdom." Reviews say her skills as a comedian add humor to the story. Maya's love interest Kumar first appears in the movie jumping strongly and skillfully while the R&B song "Whatta Man" plays in the background. Fey then describes Kumar as a "fifteen pounds of hunky monkey."

But, Fey also says the monkeys are funny on their own. At one point, Maya is desperate for food. She leads some monkeys on a raid of a human house in the area. They enjoy some birthday cake and steal eggs.

The monkeys are far from alone at the Polonnaruwa ruins. There are many kinds of animal neighbors, including leopards and monitor lizards that see the monkeys as a food source. Danger is all around. But most of it comes from the sharp climb Maya makes up the social order.

Co-director Mark Linfield said Disneynature spent almost three years filming "Monkey Kingdom." He told National Public Radio that shooting the movie was easier than one might think. He said researchers have been studying the monkeys at the ruins for fifty years. He said they were able to explain the animals' behavior and often correctly predict their actions during shooting.

"Monkey Kingdom" is the latest in a series of nature documentaries from Disneynature. The documentary combines fun with education. It is probably best for children eight years and older.

Disneynature is sharing "Monkey Kingdom" profits with the non-profit group Wildlife Conservation. For each ticket sold during opening week, Disney will give $20 to the organization. Around $5 million worth of tickets sold in the first two days of the documentary's release.

Caty Weaver wrote this story for Learning English. Hai Do was the editor.

swing – v. to move backward and forward or from side to side while hanging

drama – n. a situation or series of events that is exciting and that affects people's emotions

desperate – adj. having a strong need or desire for something or to do something

Do you think nature documentaries interfere with the lives of wild animals? Do you think such films help animals? We want to know what you think. Post your answer in the comments section.