Update Required To play the media you will need to either update your browser to a recent version or update your Flash plugin.
By Dan Friedell
16 February, 2017

Toy maker Hasbro announced on Thursday that it was removing an iconic piece of its famous board game, Monopoly.

Fans of the game voted to do away with the "thimble" playing piece.

The Associated Press news service reports that Hasbro is trying to make the game more meaningful to a younger audience.

A thimble is used in sewing. The metal device covers the top of a finger to protect it from the sewing needle. Proposed new game pieces include representations of an emoji, hashtag and rubber duck.

The thimble had been in the game for over 80 years. But people went to a Hasbro website and voted to end its use. 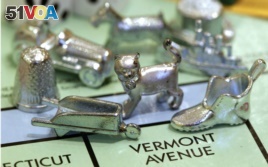 The thimble game piece, left, sits among other Monopoly tokens at Hasbro Inc., headquarters in Pawtucket, R.I. The thimble will no longer be a game piece in Monopoly.

The thimble is not the first classic piece to be removed from the game. In 2013, a vote carried out on Facebook resulted in a representation of a cat replacing the iron playing piece.

In the recent vote, fans of the game were asked to choose their eight favorite game pieces from a group that included the current eight, along with 56 possible new pieces.

Those new pieces include a stopwatch, a fish, a television, a truck, a rabbit, a trumpet and a dinosaur.

Hasbro will announce the eight winning game pieces in March. Those pieces will be available starting in August.

Jonathan Berkowitz is senior vice president of marketing for Hasbro. He told CNN that "there is a possibility other classic pieces were also voted out."

People are already posting their comments about the news on Twitter.

Another compared the news to the day space scientists decided Pluto was not a planet.

Someone else wondered if the move was a just a marketing effort.

Joey Healy wrote: "They'll remove it, and then come out with a special edition that has it back."

What do you think of Hasbro removing the thimble from the game? Let us know in the comments section.

iconic– adj. used to describe something that has become widely known

emoji – n. a picture that can be used for communication in text messaging

hashtag – n. a word or phrase that starts with the symbol # and that briefly indicates what a message (such as a tweet) is about

classic – adj. used to describe something that has been popular for a long time

edition – n. a particular version of a product