Update Required To play the media you will need to either update your browser to a recent version or update your Flash plugin.
By VOA
06 August, 2014
51VOA听写整理，转载请注明出处。文本仅供参考，欢迎纠错！

Tens of thousands of Africans are studying in China. The country provides students with financial assistance for education to develop skills that Africa needs most. And the system makes friends in Africa for the Chinese.

Violet Bwalya of Zambia is among the increasing number of Africans who are receiving financial help to study in China. She registered at Tongji University in Shanghai in September, 2013. The school is among the top universities in the country.

At a restaurant near Tongji, she shared some thoughts about being a Zambian student in China. For example, the university's restaurant serves Chinese food. 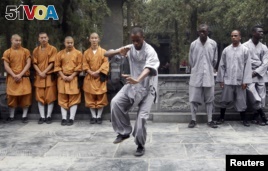 Ms. Bwalya said before she arrived, she did not know she would see so many people like herself. She said the number of Africans in China greatly surprised her.

The young woman said she is also excited by the level of development in China. She noted the tall buildings and many roads. She said Zambia does not have many tall buildings.

Violet Bwalya will study Mandarin during this year in China. Then, she will go to another school to study medicine. Those classes will be taught in Mandarin.

One man from Uganda criticized his studies in Wuhan, central China. The man asked that he not be identified. He said his classes are in English. But he said his professors cannot answer his questions because they do not speak English. The student said he himself does not know much Chinese.

"Generally, I think the biggest challenge for an international student who comes to China to study English, an English course, is availability of lecturers who can actually speak English."

Another Ugandan student said it may be too easy to receive a degree in China.

"Where I come from, you're really, you're really pushed by getting good grades. You are not going to get a 90 by just showing up or just going to the exam. But here when you come, they just, just give you 90s."

But most African students express satisfaction with their Chinese education.

Juma Salum is from Zanzibar. He studies political science at Shanghai's International Studies University. Mr. Salum wants to return to help his country after graduation. He said he believes it is his duty to do so. And he said he wants to be a link between the Chinese and the people of Tanzania and all Africa.

In 2012, China's Department of Foreign Assistance at the Ministry of Commerce said it had more than 27,000 students from Africa. By the end of 2013, more than 35,000 Africans were studying in China.