Update Required To play the media you will need to either update your browser to a recent version or update your Flash plugin.
By John Russell
25 December 2022


A growing number of Americans are turning gas-powered vehicles into electric ones by using a process called an electric powertrain conversion.

Such conversions are becoming more popular as battery technology gets better and the world turns toward cleaner energy sources. 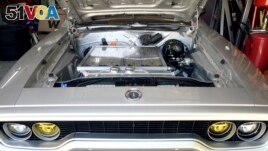 Kevin Erickson owns a 1972 Plymouth Satellite that he renamed "Electrollite" after conversion. Now, the car can go from a still position to 97 kilometers per hour in about three seconds. Its top speed is almost 250 kilometers per hour.

At the end of 2019, Erickson bought the car for $6,500. He then began a year-and-a-half-long project to convert the car to electric. He used battery packs, a motor and parts from a Tesla Model S that had been in a crash.

"This was my way of taking the car that I like — my favorite body — and then taking the modern technology and performance, and mixing them together," said Erickson, who has put about $60,000 into the project.

Jonathan Klinger is vice president of car culture for Hagerty Insurance. He said converting classic cars into EVs is "definitely a trend," although research on the activity is limited.

In May, the Michigan-based company did a web-based study of about 25,000 automobile lovers in the United States, Canada and the United Kingdom.

About one percent had at least partly converted an older model car to run on some form of electric power.

The top three reasons for converting the vehicles were for better performance, for a fun project, and because of environmental concerns. About 25 percent of respondents said they approve of older automobiles being partly or fully converted to electric vehicles.

"There's something satisfying about having a vintage car that has a carburetor," he said, because it's the same as when the car was new. Some car lovers want to keep the sound of older cars' original engines.

Difficulties and the future

Electric conversions require special knowledge to complete. They also involve safety concerns and parts that are sometimes hard to find.

And then there is the price.

Sean Moudry, who co-owns Inspire EV, a small conversion business near Denver, recently worked on a 1965 Ford Mustang. The year-and-a-half-long project cost more than $100,000 and involved many difficulties.

Moudry and his partners replaced the gas engine with a motor from a crashed Tesla Model S. They also added 16 Tesla battery packs weighing a total of about 363 kilograms.

Most older cars, including the Mustang, were not designed to have that much weight or the increased performance of a powerful electric motor. So, the team had to make changes to other parts of the car, including the suspension system.

Moudry says many people do not have the resources necessary to carry out this kind of project. As a result, he says, it will take a while for electric conversions to become common.

But that reality could be coming sooner than expected, says Mike Spagnola, president and CEO of the Specialty Equipment Market Association (SEMA), a trade group.

He said that electric vehicle products took about 1950 square meters of marketing space at SEMA's yearly show in Las Vegas this fall. That was up from only 232 square meters at the 2021 show.

Thomas Peipert reported on this story for the Associated Press. John Russell adapted it for VOA Learning English.

vintage –adj. — used to describe something that is not new but that is valued because of its good condition, attractive design, etc.

carburetor – n. the part of an engine in which gasoline is mixed with air so it will burn and provide the engine with power