Update Required To play the media you will need to either update your browser to a recent version or update your Flash plugin.
By Ashley Thompson
13 October 2022


This school year, some students in the United States have bigger worries than completing all of their homework. Demand has been growing for children's books that deal with traumatic events such as school shootings.

Sales of books for young readers on violence, grief, and difficult emotions have increased for nine straight years. Nearly six million copies of such books were sold in 2021. That is more than double the amount sold in 2012. Those numbers come from NPD Book Scan, which examines U.S. sales of printed books.

Officials say mental health issues such as anxiety and depression have risen sharply among young Americans. Educators and other supporters say children's books can play a part in helping young people deal with such issues. 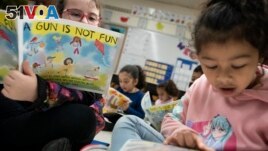 Kristine Enderle is editorial director at Magination Press, the children's publishing division of the American Psychology Association. She said it may seem like "second nature" to try to protect children from tragic news events. But it's "proving difficult to avoid big society issues," Enderle said.

"Kids face these issues and challenges in their day-to-day life," she added.

The book I'm Not Scared...I'm Prepared was first published in 2014. In the story, a teacher shows children what to do when a "dangerous someone" is in their school. The book was reprinted several times to meet demand after the mass shooting at an elementary school in Texas earlier this year.

Barnes & Noble is a nationwide bookseller. It said that bookstores around the country see interest in some books rise and fall depending on local and national events.

Michele Gay's 7-year-old daughter Josephine was killed in the 2012 Sandy Hook Elementary School shooting. Gay turned to children's books to help her two surviving daughters. One picture book she read to them was The Ant Hill Disaster. The story tells about an ant that is afraid of going back to school after it is destroyed.

Gay, who co-founded the nonprofit group Safe and Sound Schools, said The Ant Hill Disaster and other books were a source of comfort for her two daughters.

Experts say parents should make sure that books dealing with trauma have the support of mental health professionals.

Aryeh Sova is a Chicago-based psychologist. He is working with children who attended the July 4 parade outside of Chicago where seven people were killed in a mass shooting. He said that a child who asks many questions about a traumatic event may be feeling anxious or thinking a lot about it.

"If it's coming from the kid's need, then books could be a great way for kids to learn and to read together with their parents and to review it on their own and to process it at their own speed..." Sova said.

But bringing up violence when a child is not worried about it could increase their anxiety unnecessarily, Sova added.

In her graphic novel Numb to This, writer Kindra Neely describes the 2015 Umpqua Community College shooting in Oregon, which she survived. She also describes her efforts to heal after the event, even as mass shootings continued to happen around the country.

Little, Brown Books for Young Readers published Neely's book. Andrea Colvin is the publishing company's editorial director. She said that, at first, she was shocked when Neely suggested the book idea.

"I had to remember that, yes this is what our stories are like now," Colvin said. "This is what young people have experienced."

traumatic –adj. causing someone to get very upset in a way that can lead to serious problems

grief –n. deep sadness, especially at the death of someone

depression –n. a state of being deeply sad that can be a serious medical condition

ant –n. a small insect that organizes into social group

graphic novel –n. a picture book that usually deals with a serious or troubling topic