100,000 More COVID Deaths to Come Unless US Changes

Update Required To play the media you will need to either update your browser to a recent version or update your Flash plugin.
By Alice Bryant
30 August 2021


The United States can expect to see nearly 100,000 more COVID-19 deaths by December 1 unless people change their actions. That estimate comes from the nation's most closely watched prediction model.

Health experts say the number of deaths could be cut in half if nearly everyone wore a face covering in public spaces.

These predictions show that what happens with coronavirus infections this fall depends on human behavior, said Lauren Ancel Meyers. She is director of the University of Texas COVID-19 Modeling Consortium. 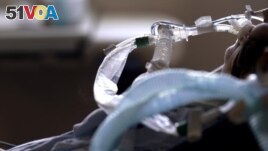 A patient with COVID-19 on breathing support lies in a bed in an intensive care unit at the Willis-Knighton Medical Center in Shreveport, La., Tuesday, Aug. 17, 2021. The hospital in northwestern Louisiana thought the COVID-19 pandemic was letting up. The

"We cannot stop Delta," she said, "but we can change our behavior overnight."

"Those things are within our control," Meyers said.

The U.S. is in the middle of its fourth wave of infection. The highly contagious Delta variant of the coronavirus is partly to blame. It has caused a sharp rise in cases, hospitalizations and deaths, and has set back months of progress against the virus.

In the U.S., deaths are now above 1,100 a day on average. The number has not been that high since the middle of March.

Experts with the University of Washington predict that 98,000 more Americans will die by the start of December. That will make the total number of U.S. deaths nearly 730,000.

The prediction says deaths will rise to nearly 1,400 a day by the middle of September, then lessen slowly. But the model also says many of those deaths can be avoided if enough Americans change their ways.

"We can save 50,000 lives simply by wearing masks. That's how important behaviors are," said Ali Mokdad. He is a professor of health metrics sciences at the University of Washington and is involved in making the predictions.

There are already signs that Americans are taking the threat more seriously.

In the past several weeks, the demand for COVID-19 vaccine shots has gone up. The number of shots given each day has climbed around 80 percent over the past month to an average of about 900,000.

More people in the states of Alabama, Arkansas, Louisiana and Mississippi "got their first shots in the past month" than in the two earlier months combined. Jeff Zients, the White House COVID-19 coordinator, announced that news last week.

Millions of students across the country are now required to wear masks. And more companies are requiring workers to get the vaccine after Pfizer's shot got full government approval last week. In addition, cities like New York and New Orleans are requiring that people show proof of vaccination if they want to eat at restaurants.

Half of American workers support vaccine requirements at work, says a new opinion study from The Associated Press research center.

Early signs suggest change may already be lowering infection rates in a few places where the virus has been a big problem this summer.

An Associated Press study shows the rate of new cases is slowing in Mississippi, Florida, Louisiana and Arkansas. They are some of the same states where first shots are on the rise.

In Florida, pleas from hospitals and a battle over face coverings in schools may have pushed some to protect themselves. And late last week, a judge blocked Florida governor Ron DeSantis' attempt to ban face covering mandates in schools.

However, the news is more troubling for places like Georgia, Kentucky, South Carolina, Tennessee, West Virginia and Wyoming. In those states, new infections have continued to rise.

Even vaccinated people should be careful, said Dr. Gaby Sauza of Seattle, Washington, who is vaccinated. Days after an August wedding in Vermont, she and other attendees tested positive for COVID-19. It happened even though events were mainly held outdoors. And attendees had to show proof of their vaccinations.

Sauza says she really wishes she had worn a face covering. She says she knows the vaccine kept her infection from being severe. But she still suffered through several days of body pains, high temperatures, tiredness, and coughing.

"If we behave, we can contain this virus," Ali Mokdad said. "If we don't behave, this virus is waiting for us."

delta – adj. a dangerous and contagious form of COVID-19

metric – adj. of, relating to, or based on a method of measuring something