Update Required To play the media you will need to either update your browser to a recent version or update your Flash plugin.
By Dan Novak
11 August 2021


Zuleydis Elledias has been waiting two months, hoping for a message about her husband and nephew. They were lost at sea after their boat sank as they were trying to reach Florida.

Six other families in the small town of Orlando Nodarse, Cuba, have also lost loved ones.

Due to "the pandemic my husband lost his job. Many places closed and he had been home for more than a year... And that made him desperate because we have a 2-year-old son," Elledias told The Associated Press.

Cuba is seeing a large increase in illegal migration to the United States. It is being fueled by an economic crisis made worse by the pandemic and U.S. sanctions. There is also less economic aid coming from Venezuela, which has its own economic crisis. Cuba has shortages in many goods. A number of protests against the government took place in July.

It has become harder in recent years to legally enter the U.S. from Cuba. The Trump administration almost completely closed the U.S. Consulate in 2017 after a number of diplomatic members became sick with a strange disease. Some claimed the disease could have been the result of an attack, which Cuba strongly denies.

Most Cubans who want to try for a U.S. visa now have to go to embassies in other countries, but getting there is very difficult due to cuts in air travel during the pandemic. Most do not have the money to pay for flights anyway unless relatives outside Cuba can give them the money.

These difficulties have pushed many Cubans to try to get to the U.S. illegally by water. They cross on small boats through the dangerous Florida Straits.

The U.S. Coast Guard said recently it has stopped 595 Cubans at sea since the fiscal year began October 1. That is larger than any fiscal year since 2017. That year, the U.S. announced that Cubans that reached U.S. shores would be sent back. Under previous American policy, all Cubans that made it to the U.S. were given asylum.

But the number is still small compared with the nearly 5,400 stopped at sea in 2016. And from 1994 to 1995, and 1980, Cuba's government stopped preventing its citizens from leaving. Tens of thousands of people tried to make it to the U.S, and thousands died in the ocean.

Alina Bárbara López is a Cuban historian. She said that when Cuba opened its border in past years, it was because of social pressure at a time of political crisis.

But now, Havana cannot open its borders because of migration agreements signed with Washington.

At the same time, Cuba's economic reforms have not been effective, López said. The economy remains poor.

"All this makes the underlying political foundation of this crisis much stronger than in the previous" crises, she said. 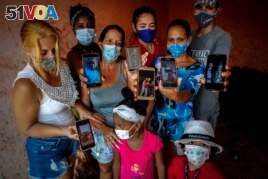 Zuleydis "Zuly" Elledias, left, shows a cellphone photo of her missing husband to a child while her neighbors pose for a group picture holding up cellphone photos of their missing relatives who ventured out in homemade boats in an attempt to reach Florida

Cuban officials admit there are "symptoms" of a possible immigration crisis. They say, however, that President Joe Biden could stop the crisis if he ended Trump's strict sanctions against Cuba.

The United States had been giving 22,000 visas a year to Cuba for 20 years until 2017, when Trump cooled relations.

Additionally, at the beginning of 2017, while former President Barack Obama was still in office, the White House ended the policy called "wet foot-dry foot." The policy let Cubans who put a foot on U.S. shores (dry foot) remain as refugees. Those stopped at sea (wet foot) were sent back to Cuba.

Elledias' husband and nephew were among a group of 18 men and two women who left Cuba for Florida on May 25. The boat sank the following night. Survivors were rescued by the U.S. Coast Guard about 29 kilometers southwest of Key West. The search by sea, land and air lasted for days.

Back in Orlando Nodarse, Elledias is praying for her loved ones to make it home safely.

"I would tell people who are thinking about this option (of crossing the Florida Straits) not to do it, that it is not a safe route. There is no money in the world that can pay for this suffering we are going through," she said.

nephew — n. a son of your brother or sister

desperate — adj. very sad and upset because of having little or no hope : feeling or showing despair

sanction — n. an action that is taken or an order that is given to force a country to obey international laws by limiting or stopping trade with that country, by not allowing economic aid for that country, etc.

fiscal — n. of or relating to money and especially to the money a government, business, or organization earns, spends, and owes

underlying — adj. used to identify the idea, cause, problem, etc., that forms the basis of something

foundation — n. a usually stone or concrete structure that supports a building from underneath

option — n. the opportunity or ability to choose something or to choose between two or more things

route — n. a way to get from one place to another place