More International College Students Staying to Work in US

Update Required To play the media you will need to either update your browser to a recent version or update your Flash plugin.
By Pete Musto
08 September, 2018


The United States has long been considered to be among the best places in the world for higher education.

For several years now, the number of international students attending U.S. colleges and universities has reached over one million.

But the appeal of such schools and life in the U.S. does not end with earning a college degree. In fact, research shows the number of foreigners choosing to stay and work after they complete their studies has risen sharply since 2008.

That increase slowed considerably in 2017, a new report found. But experts say it shows no signs of stopping.

The report on foreign college graduates comes from the Pew Research Center, an independent research group. The center released its findings in late July.

The United States lets foreigners study full-time in the country through the government's F-1 visa program. Most F-1 visa holders are only permitted to work up to 20 hours per week. However, some foreign college and university students are able to hold full-time jobs through what is known as Optional Practical Training, or OPT. OPT is temporary employment, and work that is directly related to an F-1 student's area of study.

International students accepted in OPT are permitted to work full-time for a period of up to 12 months. They can do so either while attending school or immediately after they complete it, but they must find work that relates to their college major. 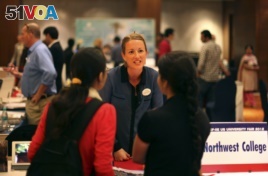 Indian students listen to a representative of Northwest College during a U.S. University fair organized by EducationUSA in New Delhi, India, Saturday, November. 3, 2012.

Neil Ruiz is a Pew researcher and the lead author of the report. He says international students' desire to work in the United States is nothing new. But their ability to find jobs greatly increased when the federal government changed the rules for OPT in 2008.

At that time, the government decided to let science, technology, engineering and mathematics degree holders extend their stay. Instead of the 12-month OPT requirement, graduates in these fields were permitted to remain in the country for up to 29 months.

"Those are the majors of foreign graduates who are staying in the U.S. that have seen the biggest growth," Ruiz told VOA.

The U.S. government made employment through OPT even more appealing to international graduates in STEM-related fields two years ago. It increased the time limit for such graduates from 29 to 36 months. The two policy changes increased the number of STEM degree-holders taking part in OPT by about 400 percent.

But Ruiz noted that as of last year, the rate of growth of foreign graduates staying in the U.S. to work has faced its largest decrease in 13 years.

In 2016, the number of foreigners taking part in OPT grew by 34 percent. In 2017, that number grew by just eight percent. Ruiz notes that in January of 2017, President Donald Trump's administration changed the rules governing the program. The change made it more difficult for graduates by limiting them to working directly for their employer. Before the new rule, those registered for OPT could do work for businesses which had relationships with the employer.

She notes that this is not the first time American policies have increased restrictions on foreigners. For example, the terrorist attacks against the United States on September 11, 2001 led the government to take a much stronger position on immigration. This led to one of the biggest decreases in international students at U.S. colleges and universities in the country's history.

But Bhandari adds that it only took a few years for foreigners to start returning. That is because the American higher education system is so widely respected.

The same goes for the ways in which the country supports its industries in seeking to explore new ideas and find solutions to the world's biggest problems. Just like native students, foreign graduates want the chance to take part in this by using the knowledge and skills they gain through their education, she says.

"The U.S. really provides this perfect environment for people who want to stay on and ... be innovators and really contribute in a meaningful way to a knowledge economy," noted Bhandari. 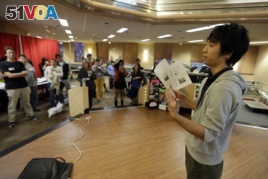 Shumpei Ushio of Japan speaks to a group of students gathered for the Cultural Coffee Hour that was hosted by the Japanese Student Association on the campus of Indiana University in Bloomington, Indiana. on November 9, 2012.

Still, people leaving their home countries for either an education or employment purposes is not always a good thing, says Brian Callahan. He works with the Borgen Project, a nonprofit organization that fights poverty around the world.

Callahan worries about the effects of what has been called "brain drain." This is when the most educated and skilled people in an area leave to find employment or continue their education elsewhere.

"A good proportion of the people who leave don't end up going back ... for 10, 20, 30 years," he said. "So I think it's more a problem of them leaving for education, getting a sense of what their economic prospects could be in a more developed country, and then, for understandable reasons, not really wanting to go back."

He argues that by leaving, these people are actually harming their home countries. They damage the local economies by not spending money on local businesses and by not providing tax money. They are also using their skills and knowledge to help companies in other countries instead of setting up businesses that could create jobs at home.

Callahan notes it is often the wealthiest people who are able to move overseas. So instead those people should consider investing in their own education systems, from schools for young children all the way to the university level, he says. That way those who cannot leave do not miss out on the same chances to succeed.

Also, Callahan suggests that people in developing nations should fight against corruption and work to make their countries friendlier to international businesses. That way those American companies they respect so much might come to them instead of the other way around.

We want to hear from you. What do you think it would be like to both study and work in the United States? If you studied at a U.S. university, would you immediately return home after graduating? Or would you seek temporary employment? Why? Write to us in the Comments Section or on 51VOA.COM.

appeal – n. a quality that causes people to like someone or something

senior – adj. higher in standing or rank than another person in the same position

innovator(s) – n. someone who does something in a new way

contribute – v. to give something, such as money, goods, or time, to help a person, group, cause, or organization

proportion – n. an amount that is a part of a whole

prospect(s) – n. a chance for something to happen