The Office for the Coordination of Humanitarian Affairs, or OCHA, prepared the report. It said the number of North Korean children being treated for severe malnutrition jumped by 38 percent between 2013 and 2014. The report is based on information from the Community Management of Acute Malnutrition, or CMAM, a United Nations Children's Fund program. The UNICEF program treats children with malnutrition.

The report says the increase coincided with the beginning of a period of drought, or lack of rain. The findings suggest that the recent drought affecting North Korean crops might have made the children's malnutrition worse. 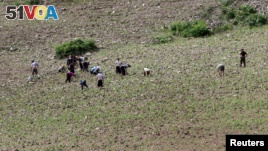 North Koreans farm in the field, along the Yalu River, North Korea. A UN agency says drought may be the cause of increased treatment for malnutrition in the country.

The North Korean government has reported that the drought in 2014 left 9 percent of agricultural land impossible to farm. This year, the drought has worsened. All North Korean provinces have had less rain than their historical averages.

OCHA warned that the malnutrition situation could worsen because of shortages in oral rehydration salts needed to treat diarrhea.

UNICEF said it is sending more aid to the country.

Christopher de Bono is UNICEF's spokesman for East Asia and the Pacific. He said, "We are sending more oral rehydration salts, as well as additional micro-nutrients, ready-to-use therapeutic food and special oral rehydration salts to the DPRK to be prepared in case the situation of children further deteriorates."

The UNICEF official said the agency provided water purification substances and containers for 1,300 families in Unpha County in North Hwanghae Province. It is considered to be one of the areas most affected by the drought.

North Korea is facing chronic food shortages and growing humanitarian needs. A study from 2012 showed that almost 30 percent of North Korean children under five years of age suffered from chronic malnutrition. Four percent of children of the same age group were affected by acute malnutrition.

However, the U.N. humanitarian operations are suffering from a severe lack of money. In 2015, the U.N. requested $104 million to provide humanitarian assistance to North Korea, including food aid. It has received only $33 million.

malnutrition – n. the state of having too little food or food lacking important nutrients

coincided – v. taking place at about the same time