Update Required To play the media you will need to either update your browser to a recent version or update your Flash plugin.
By Bryan Lynn
22 May, 2017


Careers in science are increasingly popular in North Korea as the government expands its nuclear and missile programs.

In the past, North Koreans who worked as scientists or engineers were paid very little. Science and technology careers were also not highly valued by the government.

But Radio Free Asia, or RFA, reports that has changed under the five-year-old rule of current leader Kim Jong Un. The government now offers many privileges to those studying nuclear and missile technology, according to sources inside the country.

As a result, North Koreans have shown a willingness to raise their children to become scientists, the sources said. People with university degrees in science and engineering are not required to complete military service like other citizens. 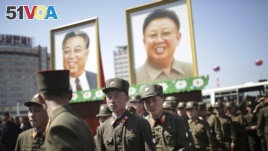 North Korean soldiers walk in the Ryomyong residential area, a collection of more than a dozen apartment buildings, after attending its official opening ceremony, while portraits of the late leaders Kim Il Sung and Kim Jong Il are seen on April 13, 2017.

The speaker asked not to be identified in the RFA report. RFA and VOA are each part of the U.S. government-supported Broadcasting Board of Governors.

Kim Il Sung, Kim Jong Un's grandfather, ruled North Korea from 1948 until his death in 1994. The source said the former leader had urged parents to raise their children to become artists.

Kim Jong Un's father, Kim Jong Il, led the nation from 1994 to 2011. During his rule, many parents wanted children to become top officials of the ruling party, serve in the court system, or have a job with the ability to earn foreign money.

It was after the rule of Kim Il Sung that North Korea created special middle schools to develop scientists, the source said. But the government did not help students who went on to study science and engineering at universities.

"Private tutors of musical instruments or dance were the ones who earned the most money until the Kim Jong Il era," said a person from Yanggang province. "But now it is private tutors who teach math, physics, and science who are earning the most money." This person also refused to be identified in the RFA report.

The man said that when Kim Jong Un became the leader of North Korea, scientists began receiving better treatment, including increased food supplies. "All parents now have an obsessive desire to raise their children to become scientists."

The treatment of scientists and engineers comes as North Korea has increased testing of missiles and nuclear devices over the past few years.

North Korea has said its goal is to develop a nuclear missile capable of striking the U.S. mainland. Most military experts say the country is currently not close to possessing such technology.

On Sunday, North Korea carried out its latest test of a medium-range rocket. The solid-fuel missile flew about 500 kilometers before landing in the sea east of the Korean Peninsula.

State news agency KCNA reported the test on Sunday confirmed the technical abilities of the new weapon system. It said North Korean leader Kim Jong Un declared the launch a success. It also said he ordered the weapon system to be produced in large numbers and deployed.

Sunday's test came one week after North Korea claimed it had successfully launched a new kind of "medium long-range" rocket. The North said the rocket was built to carry a "large, heavy nuclear warhead."

Outside observers said the May 14 test showed an important increase in missile technology. They said the rocket flew higher and longer than any other missile tested by North Korea.

privilege – n. right given to some people, but not others

preference – n. feeling or liking one thing over another

construction – n. process of building something

tutor – n. person who teaches others

obsessive – adj. thinking about something or someone too much

self-reliant – adj. able to do things by yourself