Update Required To play the media you will need to either update your browser to a recent version or update your Flash plugin.
By Anna Matteo
09 September, 2014


Every year more than 800,000 people die by killing themselves, according to the World Health Organization. The WHO is launching its first global report on suicide prevention. It says more people die from suicide than from conflicts, wars and natural disasters combined. This launch happened in combination with the International Association for Suicide Prevention's World Suicide Prevention Day on September 10.

Lisa Schlein reports for VOA from the launch of the report in Geneva.

Every 40 seconds a person somewhere in the world commits suicide. This shockingly high number, or statistic, comes from the World Health Organization. Although this statistic is large, the WHO says only a few countries have policies aimed at suicide prevention.

The International Association for Suicide Prevention, or IASP, says in 2012 suicide was the fifth leading cause of death of people between the ages of 30-49. 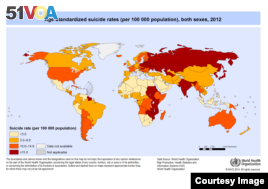 Suicide rates worldwide in 2012 according to WHO

Who Is Committing Suicide?

The World Health Organization calls suicide a major global health problem. It says a common idea is that suicides mostly happen in Western and developed countries. In reality, it says about 75 percent of suicides happen in low- and middle-income countries.

The U.N. health agency finds suicide rates around the world are highest in people over the age of 70. However, The WHO Director of Mental Health and Substance Abuse says young people are also greatly at risk. Dr. Shekhar Saxena notes suicide is the second leading cause of death among those between 15 and 29. And he adds that more men kill themselves than women.

The WHO says the highest rates of suicide are found in Central and Eastern Europe and in some Asian countries. It says suicide rates in Africa appear to be lower. But, the group warns that there is limited information from the area and it may not be reliable.

What can I do to help?

The International Association for Suicide Prevention says studies have shown that being alone, or in social isolation, can increase the risk of suicide. They say that having strong human connections can protect against suicide. The IASP says simply reaching out to people who have become disconnected from others may be a life-saving act. 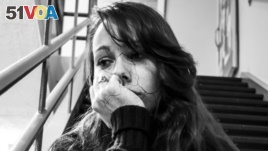 Reaching out to those who are isolated can be a lifesaver.

The report says the most common ways of committing suicide globally are poisoning from chemicals intended to kill pests called pesticides, hanging and firearms. Information from a number of European countries, the United States and other developed nations shows limiting access to these means can help prevent suicide.

Health officials agree that celebrity suicides can cause others to do the same. This is called "copycat behavior." For example, media around the world covered in great detail the suicide of actor and comedian Robin Williams in August of this year. The Academy of Motion Picture Arts & Sciences sent an image on Twitter showing Disney's Aladdin hugging the genie, voiced in the film by Mr. Williams, with the words "Genie, you're (are) free." Many mental health experts and suicide prevention organizations criticized this message. They claim it does not show the reality of suicide and could lead to copycat suicides.

Alexandra Fleischmann is a scientist in the WHO's Department of Mental Health and Substance Abuse.  She tells VOA there is a link between the way in which suicides are reported in the media and acts that are committed thereafter.

"So, this underlines and emphasizes the role the media play in reporting suicide cases.  Suicide should not be glamorized or sensationalized in the media because of the imitation that can follow."

The World Health Organization is also calling for nations to end the criminalization of suicide.

It says there currently are 25 countries in the world -- in Africa, South America, and Asia -- where both suicide and attempted suicide are considered crimes.  It says even people who accidently poison themselves may end up in prison instead of in a health center or hospital that could help them heal.

Correspondents Lisa Schlein reported the WHO story from Geneva. Anna Matteo wrote and produced it for Learning English.

statistic – n. a number that represents a piece of information isolated separate from others

depressed – v. having a serious medical condition that causes a person to feel very sad, hopeless, and unimportant : suffering from mental depression

pesticides - n. a chemical that is used to kill animals or insects that damage plants or crops