Update Required To play the media you will need to either update your browser to a recent version or update your Flash plugin.
By Anne Ball
08 May, 2015

A pediatric neurosurgeon, one of the first women to lead a high-tech company and a Baptist preacher-turned governor all announced their campaigns for the Republican party's nomination for president.

They join United States Senators Ted Cruz, Rand Paul and Marco Rubio, who have all announced they want to be the Republican nominee for president in 2016. 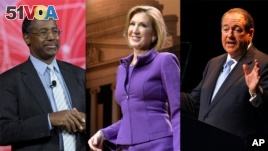 From left, Ben Carson, Carly Fiorina and Mike Huckabee have announced their campaigns for the Republican nomination for president.

Dr. Ben Carson rose from poverty to be the head of pediatric neurosurgery at Johns Hopkins Children's Center in Baltimore. His mother raised him by herself, in Detroit, Michigan. Now, the retired surgeon is the first African-American to enter the 2016 presidential race. He is a social conservative with no previous political experience.

In his announcement speech, Dr. Carson said he wants to reduce the power of the central government. He is known for making controversial statements. He has denounced President Obama's health care law, also known as "Obamacare." He compared it to slavery. And in a recent interview he said homosexuality is voluntary.

Also this week, Carly Fiorina became the first Republican woman to enter the 2016 race. She once headed the computer company Hewlett-Packard. She says her knowledge about the business world makes her different than the rest of the candidates. She has been very critical of the other woman running for president: Democratic candidate Hillary Clinton. Ms. Fiorina questions some of Ms. Clinton's actions while she was U.S. secretary of state.

Mike Huckabee announced on Tuesday that he is running for president again. Mr. Huckabee is both a Baptist preacher and a former governor of the state of Arkansas. When he first ran, in 2008, he won the Iowa caucus. Mr. Huckabee brings to the race a social conservative view that is popular with evangelical Christians: he opposes abortion and gay marriage. Although he won eight state primaries in 2008, Mr. Huckabee eventually ran out of money. At the time, analysts said he had trouble reaching beyond social conservatives in the Republican party. They now say that Mr. Huckabee and the other Republican candidates will talk about national security and foreign policy issues.

Ford O'Connell is a Republican strategist.

"I think when all is said and done and we get to the general election in 2016, you're going to have three issues: economic mobility, jobs and national security. And while they do overlap, the ability for Republicans to distinguish themselves with the Republican primary on national security is going to be very, very important."

Early public opinion studies show two Republicans who have not officially entered the race have strong support. Former Florida Governor Jeb Bush is leading in the early polls. He is the son and brother of two former U.S. presidents. Behind Mr. Bush in the polls is Wisconsin Governor Scott Walker. He is popular with Republicans for opposing labor unions.

Anne Ball wrote this story for VOA Learning English with additional material from VOA National Correspondent Jim Malone. Hai Do was the editor.

nominee - n. a person chosen as a candidate

pediatric neurosurgeon – n. a surgeon who operates on a child's brain, nerves or spinal cord

controversial – adj. relating to or causing much discussion or argument

evangelical – adj. a Christian group that stresses the authority of the Bible, that Jesus Christ is a personal savior, and that these beliefs should be told to people throughout the world

abortion – n. a medical procedure to end a pregnancy and cause death to the fetus