Update Required To play the media you will need to either update your browser to a recent version or update your Flash plugin.
By Susan Shand
06 May 2021


France joined the United States on Thursday in support of easing patent protections on COVID-19 vaccines. The action could help poorer countries get more shots and quicken the end of the pandemic.

On Wednesday, the U.S. government changed its own position and supported removing the protections. It brought cheers from health activists and complaints from drug companies.

During a visit to a vaccine center on Thursday, French President Emmanuel Macron added, "I completely favor this opening up of the intellectual property." 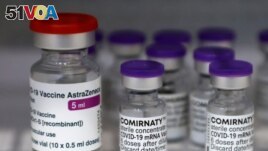 Vials of the AstraZeneca and Pfizer-BioNTech Comirnaty coronavirus disease (COVID-19) vaccines are pictured in a General practitioners practice in Berlin, Germany, April 10, 2021.

Despite his support for removing protections, Macron also said it would not solve the problem of getting more vaccines to more people around the world. He noted that places like Africa were not equipped to make COVID-19 vaccines. He said vaccine donation should be most important.

While the backing from two countries with big drug making companies is important, many problems remain to be solved.

The idea of removing patent protections was first floated by India and South Africa in October.

Some 80 countries, mostly developing nations, have supported the Indian and South African idea, an official who was not permitted to give his name said.

However, if one country in the World Trade Organization (WTO) votes against the plan, it will block efforts to make the change.

Australian Prime Minister Scott Morrison called the U.S. announcement "great news," but did not answer a question about whether his country would make the same decision. South Korean officials said they were also watching the Biden announcement, but did not say they would do the same.

Russian President Vladimir Putin said his country would support it.

The drug industry says that a faster answer to the lack of vaccines in some parts of the world would be for rich countries to start sharing their vaccine supply with poorer countries.

The industry argues that production of coronavirus vaccines is difficult and cannot be increased by easing intellectual property protections. Instead, it says that reducing problems in supply chains as well as the lack of vaccine ingredients are the most important problems right now.

"A waiver is the simple but the wrong answer to what is a complex problem," said the International Federation of Pharmaceutical Manufacturers and Associations. The organization added that the idea "will not increase production nor provide practical solutions" to the health crisis.

Intellectual property expert Shyam Balganesh is a professor at Columbia Law School. He said a WTO waiver could help but it would only go so far because of other problems in the manufacturing and shipping of vaccines.

waiver – n. an official document indicating that someone has given up or waived a right or requirement

complex – adj. not easy to understand or explain : not simple