More than Half of the World’s Primates Disappearing

Update Required To play the media you will need to either update your browser to a recent version or update your Flash plugin.
By Anne Ball
19 March, 2017


Scientists who study primates say that we are moving towards a time when species like gorillas will no longer be found in the wild .

They say Orangutans would be gone too. And Madagascar would lose its lemurs.

Jo Setchell is a primatologist at Durham University in Britain. She studies primates, the group of mammals that includes gorillas, chimps, monkeys, gibbons, mandrills, and lemurs. And, of course, humans.

"So If we have 60 percent threatened with extinction at the moment, then we will see that number rise and within our lifetimes, within our children's lifetimes, we will eradicate other primates." 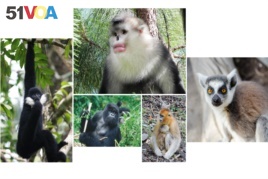 In all, there are an estimated 600 different species of primates. They include the little creature called the mouse lemur, whose body is only about six centimeters long. Then, there is the largest of the species, the gorilla, weighing up to 250 kilograms.

Primates face one common threat: loss of habitat, the places in nature where they live. Primatologists like Setchell say human activity is to blame.

More than half of all primate species are grouped in four countries: Brazil, Indonesia, Madagascar and the Democratic Republic of Congo.

Paul Garber says each of these countries is working to help protect the primates in their areas. "But often, there is neither the funds, community support nor in-country expertise to address their conservation problems."

Madagascar is a good example of these problems, he says. It is home to over 100 primate species; almost all of them live nowhere else. And 94 percent of them are endangered. Ninety percent of the original forests of Madagascar have been cut down, Garber says.

Neither Garber nor Setchell have any easy answers about how to stop this road to extinction.

"We knew that primates were in trouble, but I think even for those of us who work in primate conservation, it was still shocking to discover quite what the scale of the problem is."

They do say that the clearest way is to slow human activity in primates' habitats. They also say the decrease is reversible if humans make primate and habitat conservation a top concern.

eradicate – v. to remove (something) completely : to eliminate or destroy (something harmful)

conversion – n. the act or process of changing from one form, state, etc., to another

logging – v. to cut down trees in an area for wood

scale – n. a device to measure or weigh things

reversible – adj. able to be changed back to an earlier or original state