Update Required To play the media you will need to either update your browser to a recent version or update your Flash plugin.
By Dan Friedell
01 October 2022


International students who come to the United States often study science, technology, engineering and mathematics, also known as STEM. Not as many come for programs in humanities or the arts, the 2021 Open Doors Report says.

Under U.S. laws, after finishing school, international students are permitted to work in the country for one year under the Optional Practical Training, or OPT program. For STEM students, the program extends their work permit for an additional two years in their field of study.

The U.S. immigration office publishes the STEM Designated Degree Program List for study programs that it considers for the OPT extension. The programs include "new technologies using engineering, mathematics, computer science, or natural sciences (including physical, biological, and agricultural sciences)." 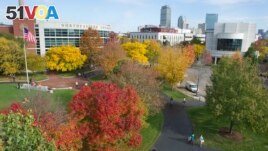 But international students who are interested in business, psychology, news reporting and even theater should know that more study programs in the U.S. are coming to the list.

Northeastern University in Boston, Massachusetts, is currently looking for students for a STEM-designated journalism program that will start in one year.

The program will offer a Master of Science degree in Media Innovation and Data Communication. Students will take classes such as "Telling Your Story with Data" and "Digital Journalism."

John Wihbey teaches journalism and media innovation at Northeastern. He said today's journalists need to be able to work on data visualization projects, read business printouts and work on digital media such as video and audio. Many journalism students are already doing this work, so it makes sense for schools to create new study programs.

"And so those students who were inclined in that direction ended up taking a lot of interactive graphics, design, data viz and coding courses. And so we started to see graduates who we, you know, had no question belonged in the world of STEM."

At one point, the U.S. government was worried that OPT was taking jobs away from American workers. However, once President Joe Biden's administration came into office, the chance for international students to do two extra years of OPT actually increased.

Eunkyu Lee is a business and marketing professor at Syracuse University in New York state. He said international students who want to work in the U.S. should look for STEM-designated programs when they are searching for colleges. People may think that business study programs such as marketing do not require STEM skills. But Lee said that is not true.

"There is a growing emphasis on the importance of data analytics. You can imagine that each time you make a call or visit a web page, or use your mobile devices, a huge amount of data are being accumulated."

Data, Lee said, "is of great concern" to businesses. So students with STEM degrees have an advantage when it comes to finding jobs.

And then, because of the extended OPT, a student might be able to find an employer who will help them get a work visa.

journalism –n. the activity or job of collecting, writing, and editing news stories for newspapers, magazines, television, or radio

humanities –n. areas of study (such as history, language, and literature) that relate to human life and ideas

designate –v. to mark, show, or represent (something)

innovation –n. the act or process of introducing new ideas, devices, or methods

field –n. an area of work or study

graduate –n. a person who has completed a study program

analytics –n. the careful study of something in order to take away meaning

accumulate –v. to gain or collect something

visualization –n. the act of showing something with pictures or colors

therapy –n. the treatment of a physical or mental illness

emphasis –n. special importance given to something