Update Required To play the media you will need to either update your browser to a recent version or update your Flash plugin.
By Bryan Lynn
28 April 2021

The companies say 3D printers can build homes faster, for a lot less money, and in a much more environment friendly way than traditional building methods. They say the technology may also help solve America's shortage of affordable housing.

3D printers make physical objects based on 3D models created by a computer. The machines put down many thin layers of material -- such as plastic, metal or concrete -- on top of each other. Objects are created through this process, from the bottom up.

In recent years, 3D printers have mostly been used to create small, specialized items. This includes parts for automobiles, airplanes and medical devices. Many consumer products can also be 3D printed as well, from clothes to foods. 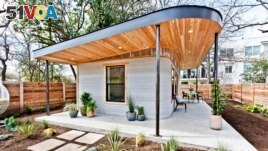 This photo provided by ICON shows one of its 3D-printed homes in Austin, Texas. (Regan Morton Photography/Courtesy of ICON via AP)

Now, an increasing number of startup companies are using 3D printing to build entire homes. Since the technology is still developing, not many have yet been built. However, the top companies plan to greatly increase production in coming years.

The startup company Icon, based in Austin, Texas, made news in 2018 by completing the first permitted 3D printed home in the U.S. At the time, it said the home had been built in just a day.

Since then, the company says it has been developing new technologies in robotics, software and manufacturing materials. It designed its own 3D printer and says the robot-powered machine can create structures up to 185 square meters. The printing process uses a cement-based mixture that Icon says is stronger and less costly than traditional building materials.

Icon co-founder Jason Ballard told The Associated Press his company's 3D printing system can reduce construction costs by up to 30 percent and produce a home twice as fast as traditional methods. The process can do the work of 10 to 20 workers in several different fields. The machines, unlike humans, can work 24 hours a day.

Sam Ruben is the co-founder of another home building company, Mighty Buildings. "With 3D printing, we're able to print exactly what we need," he told the AP. The company uses a 3D printer in Oakland, California to produce all parts, which are shipped to the site of the home. The house can then be put together with simple tools, Ruben said.

Mighty Buildings advertises several home models on its website. A complete, mid-size home up to 65 square meters costs $187,250. The company also produces 32 square meter "mighty studios" that start at $115,000. The smaller structures are designed to be used as extra bedrooms, home offices, etc. Ruben said the prices are about 40 percent lower than traditional homes.

He added that the 3D printing process removes nearly all building waste, which can save up to three tons of carbon per home. The company has a goal of producing 1,000 structures next year. It has teamed up with a developer to complete a solar-powered community of 3D printed homes in the California desert. Orders have already been sold out, with 500 people on a waiting list.

A New York company, SQ4D, also uses 3D printing technology to build homes. In February, the company showed off a 130 square meter model home to demonstrate its printer's abilities. SQ4D plans to sell its homes starting at $299,000. The company has even started listing the homes on the internet selling site Zillow.

Kirk Andersen is SQ4D's director of operations. He told Reuters the 3D printer will permit buyers to easily create their own home design, room by room.

While 3D printing as a home building method is just getting started, Andersen said others in the construction industry need to get prepared for big changes. "This is the beginning. This is just scratching the surface," he said.

Bryan Lynn wrote this story for VOA Learning English, based on reports from The Associated Press, Reuters, and Icon. Hai Do was the editor.

affordable – adj. reasonably priced and able to be bought by most people

layer – n. an amount of a substance that covers a surface

consumer – n. someone who buys or uses goods or services

scratch – v. to act on something