Update Required To play the media you will need to either update your browser to a recent version or update your Flash plugin.
By John Russell
11 January 2022

While some of these crops are used for fuel or fed to cattle, most are not harvested because their value is greater if they break down in the soil. 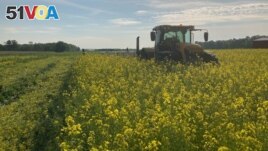 Illinois farmer Jack McCormick planted around 140 hectares of barley and radishes last fall. The crops will be killed off with a weed killer next spring before McCormick plants soybeans in the same dirt.

The barley and radishes will not be used for food, but Bayer AG will pay McCormick for planting them. His so-called cover crops will create carbon offset credits for the seeds and chemicals maker.

A carbon offset credit is an officially approved way to show a greenhouse gas emission reduction.

These carbon credits are used by companies to offset, or make up for, the other pollution they create.

Increased cover crop growing shows how the U.S. agricultural industry is changing. Farmers no longer make money only by selling crops for food and animal feed. They may also be paid for the part crops can play in limiting planet-warming emissions.

Cover crops are generally seen by environmentalists as an improvement over traditional agriculture.

Rob Myers is the director for the Center for Regenerative Agriculture at the University of Missouri. He estimates that by 2030 between 16 million and 20 million hectares of cover crops will be planted each year.

Companies including Bayer, Land O'Lakes and Cargill Inc have launched carbon farming programs over the past two years. These programs pay growers for capturing carbon by planting cover crops and reducing soil tillage.

U.S. federal government programs have for years paid farmers not to grow crops on some land, such as areas with a lot of wildlife.

The Biden administration plans to expand those programs. President Joe Biden's Build Back Better bill targeted some $28 billion for such programs, including up to $5 billion in payments to farmers and landowners for planting cover crops. However, the bill's future remains unclear.

Why have cover crop plantings grown?

Much of the increase in cover crop planting has been led by a small number of farmers pursuing soil fertility or water management. Program payments rarely cover the cost of seeds and labor.

"You've got to want to do it," said McCormick.

He has increased his cover crop area by more than ten times in the past six years. He received his first payment from Bayer this autumn.

Jason Weller, president of Truterra, told an American Seed Trade Association meeting last month, "The demand for seed is going to exceed supply. So, there's going to be a huge supply challenge."

While emissions from destroying the crops are small, some critics say more cover crop planting will increase the use of farm chemicals.

Amanda Starbuck, research director with Food and Water Watch, said, "Cover crops can be a really important part of ... farming systems....But it all depends on how they're being implemented."

Karl Plume reported on this story for Reuters. John Russell adapted it for Learning English.

tillage – n. the activity or process of preparing land for growing crops

exceed – v. to be greater or more than (something)

implement – v. to begin to do or use (something, such as a plan) : to make (something) active or effective