Update Required To play the media you will need to either update your browser to a recent version or update your Flash plugin.
By Susan Shand
18 May 2021


A growing number of U.S. school systems are removing mask requirements for students. But some public health experts and parents are concerned that it is too soon to lift the rules.

In Florida, the head of a school system recently announced she would agree to remove a mask requirement that had been in place since September. The decision came after a long, angry fight over mask requirements.

But the school board chair in Santa Rosa County, Wei Ueberschaer, said she believed the requirement should remain until the end of the school year. 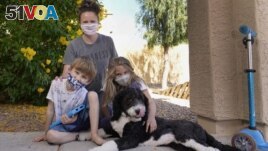 Christie Black, middle, with her two children, Angela and Luke, left, and the family dog Teddy, pose at their home, Tuesday, May 11, 2021, in Mesa, Ariz. (AP Photo/Ross D. Franklin)

Parents shouted insults at her. "Communist! Democrat!," they said. Moments later, the school board voted to end the mask requirement for all children.

The U.S. Centers for Disease Control and Prevention (CDC) announced last week that vaccinated Americans do not need to wear masks. But it is still unclear if that is the right decision for children in school. Most children have not yet been vaccinated.

The Food and Drug Administration (FDA) recently approved Pfizer's COVID-19 vaccine for children as young as 12. It is unlikely, however, that many young children will be vaccinated before the end of the school year.

CDC information shows that infection rates among American children ages 14-17 are now higher than for all Americans. The rates among children 6-13 are also rising.

When asked about children wearing masks at school, the CDC director, Dr. Rochelle Walensky, said the agency would soon announce new guidelines for schools, businesses and other areas.

The discussions about school rules have been emotional and highly divisive around the country. In some cases, police were called to meetings. School leaders have been caught between anti-mask parents and teachers' unions.

School systems have changed decisions on the issue several times. Many see a continued need to protect children who are not vaccinated against COVID-19. Others argue that masks make children uncomfortable and the requirements limit personal freedom.

"The mask is a personal choice, and I wore it at the beginning, but I just decided that it wasn't about the mask anymore," said Cynthia Licharowicz. She is a parent in Milton, Florida, who opposes the requirement.

"So, I decided to take it off, and I wanted my child to have the same choice," she added.

The arguments show the state of communities 14 months after the pandemic began to spread in the U.S.

Some U.S. schools remain closed to stop infections. Others, from Alabama in the south to Wyoming in the west, decided to end student mask requirements. When the new school year starts in September, many more schools will likely end their requirements.

Many parents in schools where masks are no longer required are worried.

"I don't see any harm in wearing masks, and there is potential harm in not wearing a mask," said Christie Black.

She is the mother of two young school-age children in Mesa, Arizona. She did not understand the decision made by her community's schools to end the requirement.

Evidence from earlier in the pandemic found children less likely than older people to be infected with the coronavirus and less likely to become seriously ill from COVID-19.

Black continues to send her two children to school with masks, but says they remove the masks as soon as they see other children without them.

"It just feels like we're more concerned with our own freedom and rights than doing what's best for the most vulnerable," she said.

Back in Santa Rosa, Florida, Jennifer Hensley, a Santa Rosa County parent and public school teacher, was the only member of the public at the meeting who spoke in favor of keeping the mask requirement. She said she was worried about the health of teachers and of her 15-year-old daughter, who has an autoimmune disease.

Another parent, Hailei Smead, a mother of three students, runs a Facebook group called Santa Rosa County Parents SPEAK UP. It was created in September to stop mask requirements and has nearly 900 registered members.

"I strongly recommend the use of face masks, especially for those who are not fully vaccinated," school leader Ueberschaer said before the vote. She was rewarded with insults from some parents.

"It truly does make me feel sad that face masks have morphed from a virus-prevention strategy to a political statement," she said.

mask – n. a covering for the face or part of the face: especially related to preventing the spread of disease

vulnerable – n. able to be easily hurt, influenced or attacked

autoimmune – adj. relating to a condition in which a person's antibodies attack substances naturally found in the body

recommend – v. to suggest that something should be done

morph – v. to gradually change from one thing to another