Update Required To play the media you will need to either update your browser to a recent version or update your Flash plugin.
By John Russell
09 April, 2016

Hunter Bliss, like more and more American students, left the United States to go to college.

He told the BBC that the cost of education was one reason he went to Germany to get a degree in physics. 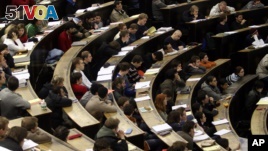 FILE - Students listen to a lecture at the Technical University in Munich, southern Germany, in a Jan. 25, 2005 file photo. (AP Photo/Jan Pitman)

As a student at the Technical University of Munich, in Germany, he pays around $6,000 dollars per year to cover his rent, insurance and other living expenses.

To study at the University of South Carolina, his home university in the U.S., Hunter would have to pay more than $10,000 dollars per year, with scholarships.

Bliss convinced his mother that studying in Germany was a better option for him.

"You have to pay for my college, mom - do you want to pay this much or this much?"

More and more Americans go abroad for a college degree

The Institute of International Education, or IIE, says that the number of U.S. students pursuing college degrees in Western Europe increased by about 5 percent from 2010 to 2012.

Around 68 percent of U.S. students pursue degrees in English-speaking countries. The top destination countries were the U.K. and Canada.

France and Germany were third and fourth, respectively.

Germany, in particular, has attracted many more American students in recent years, like Hunter Bliss.

From 2010 to 2012, the number of American students enrolling in German universities increased by almost 10 percent, says the IIE.

In 2012, there were more than 4,000 American students pursuing undergraduate, master's and doctoral degrees in Germany.

Why do Americans go abroad?

The IIE says American students choose to study in another country for two main reasons.

First, international experience is becoming more important in the modern job market. Second, the cost of higher education has continued to rise in the United States.

What are the costs of studying in Europe?

Many American students choose Germany because of the low cost of education there.

German public universities do not charge tuition fees. And many universities in Germany offer courses in English, too.

Casey Detrow, a New Yorker who is getting a degree in American Studies at Humboldt University, in Berlin, told NPR that she chose to go to school in Berlin because it was free.

She said: "I really cannot even compare that to what I would be getting in the United States. When you are talking free versus $50,000, I feel like there is no contest. I can't justify going back."

Other students have made similar statements.

Michael Ferrante, a college student, told Bloomberg that "it was infinitely cheaper to study in Berlin." Ferrante said he paid $500 for two semesters at Humboldt and Freie Universität in Berlin.

For two semesters at Johns Hopkins, a university in the United States, he spent roughly $27,000 dollars with financial assistance.

Why does Germany continue to give free education to foreign students?

Jeffrey Peck, the Dean of the Weissman School of Arts and Sciences at Baruch College, City University of New York, told the BBC about some of the differences between Germany and the United States.

"College education in the US is seen as a privilege and expected to cost money and in Germany it is seen as an extension of a free high school education where one expects it to be provided," he said.

The German government has been eager to encourage students to come to Germany for another reason.

Like many countries in Western Europe, Germany has a demographic problem. In other words, the population is becoming older, and fewer young people are entering college and the job market. 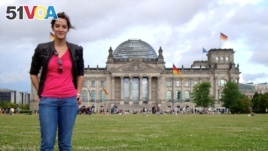 Aminah Sheikh, an American neuroscience graduate student from University of Maryland, College Park, was a fellow at the JGU Medical Center in Mainz, Germany in Summer 2014. (Photo courtesy of Aminah Sheikh)

The hope is to attract skilled foreign students who will stay in Germany.

For now, the state government in Berlin says it has no plans to introduce fees for international students.

Steffen Krach, the Secretary of Science, said: "We will not introduce tuition fees for international students. We don't want the entry to college to be dependent on your social status."

Sebastian Fohrbeck of the German Academic Exchange Council told the BBC that the system is working. He says that 50% of foreign students stay in Germany.

He also said: "Even if people don't pay tuition fees, if only 40 percent stay for five years and pay taxes, we recover the cost for the tuition."

This story uses information from the BBC, NPR, Bloomberg and the Institute for International Education. John Russell adapted this story for Learning English. Kathleen Struck was the editor.

rent – n. money that you pay in return for being able to use property and especially to live in an apartment or house that belongs to someone else

scholarship – n. an amount of money that is given by a school or another organization to a student to help pay for the student's education

pursue – v. to try to get or do (something) over a period of time

fees – n. an amount of money that must be paid

justify – v. to provide or be a good reason for (something)

privilege – n. a right or benefit that is given to some people and not to others

status – n. the position or rank of someone or something when compared to others in a society, organization or group