Update Required To play the media you will need to either update your browser to a recent version or update your Flash plugin.
By VOA
23 November, 2012

But he faces unrest at home after giving himself wide new powers the next day. Protesters have attacked Muslim Brotherhood offices in several cities. Police fired tear gas at crowds in Cairo's Tahrir Square. 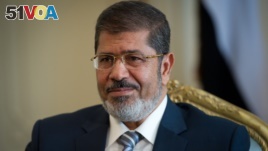 Mr. Morsi says Egypt is on a path to freedom and democracy. He says he wants to move Egypt forward as a stable and safe nation. He spoke Friday in Cairo as his supporters and opponents demonstrated in different parts of the city.

The president is a former leader of the Muslim Brotherhood organization. He narrowly won election in June as Egypt's first elected president and its first Islamist president. Egyptians ousted longtime president Hosni Mubarak during the popular revolution early last year.

Mr. Morsi's declaration on Thursday said his decisions cannot be appealed. He barred the courts from taking any action to dissolve the upper house of parliament or the assembly writing a new constitution. Both are controlled by Islamist allies of the president.

Mr. Morsi also ordered retrials of former officials who used violence in efforts to suppress last year's Arab Spring revolution. Those new trials could include a retrial for Hosni Mubarak. He was sentenced to life in prison for failing to stop the killings. But he avoided convictions on more serious offenses of corruption and ordering the deadly suppression of the protests.

Opposition leader Mohamed ElBaradai says Mr. Morsi has made himself a "new pharaoh" by claiming so much power.

The cease-fire between Israel and Hamas militants in Gaza halted the most serious Israeli-Palestinian fighting in four years. More than one hundred sixty Palestinians and six Israelis were killed. Israel and Hamas traded rocket fire for eight days after an Israeli missile strike killed the Hamas military chief in Gaza City. That attack followed months of almost daily rocket fire into southern Israel from Gaza.

On Friday the first death was reported since the truce took effect Wednesday night. Israeli troops shot and killed a Palestinian man and wounded others as a group of Palestinians came toward the border fence.

MUSTAFA EL LABBAD: "Egypt stagnated in the last three decades so much that Egypt was not in a position to negotiate any other matter outside its border."

Protests in support of Gaza broke out across Egypt after the conflict intensified. Hamas grew out of the Muslim Brotherhood. But few Egyptians want to see large numbers of poor and often militant Palestinians cross the border from Gaza into the Egyptian Sinai.