Mortgage and Other 'Death' Words

Update Required To play the media you will need to either update your browser to a recent version or update your Flash plugin.
By VOA
08 August, 2015

Part of the "American Dream" is to own a home. Many Americans borrow money when they buy a home. They use a mortgage loan, known simply as a mortgage, to help pay for the property. To get the money, the buyer signs an agreement with a bank or loan company. The borrower promises to pay back the money, plus interest, over a period of years.

The word "mortgage" comes from two Old French words. Mort means dead and gage means to promise or pledge. Combine the two terms and you get "death pledge." Perhaps this deadly sounding name is why many people are afraid to buy a house, and choose to rent one instead. Because of the word's French roots, we do not pronounce the letter "t" in mortgage. 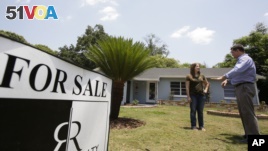 Most homeowners in the U.S. know that they will need a mortgage, or loan, to buy a house. What many probably don't know is that "mortgage" is French for "death pledge."

The second half of the word, gage, is part of another useful word - engage. Engage has many meanings.

You can enter into battle with, or engage, your enemy. You can engage, or ask, someone to work for you. If you are engaged in a business, you've been taking part in it or doing it.

To engage also means to hold someone's attention. If you have an engaging speaking style, you can hold the attention of others -- or engage them -- for a long time.

But let's leave the happy thoughts of marriage and get back to death. The French term "mort" gives a deathly meaning to other English words – words like mortal, mortality, mortician and mortuary.

Many religious people believe that when we die, we simply leave our mortal life -- or life on this world -- for an afterlife. Something that does not die is immortal. Clergymen or other religious leaders often pray for a person's "immortal soul."

Mortal can also be used for something or someone with the ability to cause death. For example, someone who is your mortal enemy may want to kill you or they just may never give up in the fight against you. In battle, if you suffer a mortal wound, you are likely to die from it. Mortal combat means a fight to the death. These three are all common word combinations using the word "mortal."

On the lighter side is the word "mortified." When you are mortified, you feel so embarrassed or foolish that you want to die -- but not really. We often use mortified in situations that are not very serious.

Being a mortician, however, can be serious business. A mortician prepares dead people for burial. They also can help plan and organize funerals. The word mortician is a combination of mortuary, a place in which dead bodies are kept, and the suffix –ician, as in physician.

And that's Words and Their Stories from VOA Learning English.

Do you have a mortgage on your home? Have you even felt mortified? Do you think about your mortality? Do share in the Comments Section.