Update Required To play the media you will need to either update your browser to a recent version or update your Flash plugin.
By Phil Dierking
19 February, 2018


Mosquito nets usually are used to prevent the spread of diseases which are passed by mosquito bites. Those treated with insect killing substance have been especially successful in the fight to against malaria. But, nets now are also being used for catching fish in many tropical areas, a new study says.

The nets' effectiveness is worrying some experts about possible harm to fish populations.

The study was published by the free online journal PLOS ONE. The study's writers say poverty is the main reason for mosquito net fishing. They say efforts to limit use of the method might hurt people who live on the edge of survival.

Catching many fish in many places

Insecticide-treated mosquito nets are used to cover the place in which a person sleeps to prevent mosquitos from biting them.

The nets are provided widely, often at low-cost or even free. The World Health Organization says access to the nets helped reach a drop in malaria deaths. The WHO found a 60 percent reduction from 2000 to 2015. More than 150 million nets were given to countries where malaria exists in 2015.

Rebecca Short is the lead investigator of the new research. She is studying for her doctorate in the ocean resources field at Imperial College London. Short is based in Mozambique. She says she sees many people there using insecticide treated nets to fish. 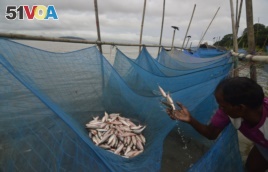 Fishing this way is easy and low cost. But, this could result in higher numbers of fishermen and decreasing numbers of an already limited supply of fish.

Short and her coworkers did a small online study to learn about the size of the issue. They gave the survey to conservation, health and development workers worldwide.

"I don't think even we expected to get the results that we did," Short says. "Pretty much everywhere that malaria's a risk, there's people fishing with these nets."

Some of the time the fishing was simple, and would just involve, "A couple people dragging a net through the water," Short says. She said the small-scale net fishing can provide a good source of protein and money without serious problems. She also said this can be good for women, who are often prevented from doing more profitable work.

However, the researchers found wider, and more damaging, use of mosquito nets elsewhere. The study describes cases, as in Bangladesh, where fishermen blocked entire river spans with mosquito nets.

In these cases, Short says, "Obviously, absolutely nothing gets through."

Fishing with mosquito nets is illegal in many places to keep the fish population safe. But Short is not sure that is the best way to control the method.

"There's huge issues with enforcement," she says. "Do you put a mother who's trying to feed her kids in prison for three years just for using a mosquito net to fish with?"

Tim McClanahan is a reef scientist with the Wildlife Conservation Society. He has questioned the benefits mosquito-net fishers are reportedly gaining.

He says many people believe that, "because the poor and women are doing it, it is improving their food security." However, his research has found that is not always true.

Fishery management methods include catching larger, full-grown fish that have had time to produce children.

But, Rebecca Short's study discusses a debated method called "balanced harvest." In this method, fishers try to catch fish of all sizes, based on the numbers in their population. Since mosquito nets catch everything, the authors note, they may be helping.

McClanahan disagrees. He says this idea is "somewhere between wrong and dangerous." The harvest from mosquito nets is not balanced, he said.

Short agrees that the issue needs more study. She says researchers need to know the exact effect mosquito net fishing is having on fish populations. And she says they need better local understanding of why people are doing it.

This story was originally written by Steve Baragona for VOAnews.com. Phil Dierking adapted this story for VOA Learning English. Caty Weaver was the editor.

Do you think it is a good idea to fish with mosquito nets? Why or Why not? We want to hear from you. Write to us in the Comments Section or on 51VOA.COM.

insecticide - n. a chemical substance that is used to kill insects

mosquito net - n. a net that is placed over something (such as a bed) in order to keep out mosquitoes

subsidize - v. to help someone or something pay for the costs of (something)

tropical - n. of, relating to, occurring in, or used in the tropics