What Are the Colors of Choice for Cars?

Update Required To play the media you will need to either update your browser to a recent version or update your Flash plugin.
By Christopher Jones-Cruise
22 March, 2016

Les Jackson is a reporter who writes about cars. He says the car colors Americans choose do not show dirt as much as the colors of other cars. He says that means the owners wash their cars less, saving money. And he notes some areas that are suffering from water shortages do not permit people to wash their cars often, if at all. 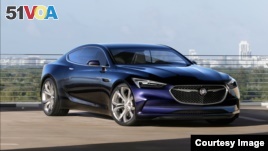 The Buick Avista in a chromatic blue that glows from one angle and deepens to black from another. (Photo &#169;General Motors)

Benton also says research at Monash University in Australia suggests that there is a lower risk of crashes during the day for white cars compared with darker ones.

Axalta says about 11 percent of cars sold in North America are red and 8 percent are blue. In South America, 10 percent of new cars sold are red.

Green has become less popular. Benton notes that in the mid 1990s, "green was the most popular color in North America. Today, green is hard to find."

Sometime in the future, people may not have to choose the color of their car -- technology may let owners change their car's paint color anytime.

Carol Guensburg reported this story from Washington. Christopher Jones-Cruise adapted the story for VOA Learning English. Hai Do was the editor.

dealership - n. a business that sells a specific product