The Most Dangerous Time for Mothers and Babies

Update Required To play the media you will need to either update your browser to a recent version or update your Flash plugin.
By Bruce Alpert
22 August, 2016


The days immediately before and after child birth appear the most dangerous for mothers and babies.

The World Health Organization, or WHO, estimates that more than 300,000 women die every year during pregnancy or childbirth. Each year, about 2.6 million babies are stillborn and another 2.7 million babies die during the first 28 days of life, it said.

Most of the deaths are taking place in South Asia and in Africa, south of the Sahara Desert. Many of the deaths could have been avoided with quality health care, WHO officials said. 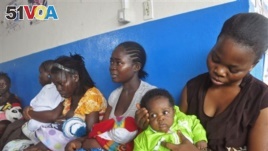 In this 2014 photo, mothers wait on line for their children to be vaccinated by heath workers at the Pipeline Community Health Center, situated on the outskirts of Monrovia, Liberia. (Associated Press)

Another problem is that nearly all babies who are stillborn and half of all newborn deaths are never documented. Those deaths are not reported to or investigated by government health agencies.

Officials said this means the actual number of stillborn and newborn deaths is probably even higher than the WHO's own current estimates.

The United Nations agency says the lack of information makes it harder to find solutions.

Ian Askew is director of Reproductive Health and Research at the WHO. He said it is important for all births and deaths to be counted so health officials can make better decisions on how to prevent future deaths.

In this way, Askew said, countries could improve the quality of health care and stop "millions of families from enduring the pain of losing their infants or mothers."

The WHO released three reports earlier this month to help health agencies do a better job collecting information.

Askew told VOA that traditions and beliefs often interfere with the collection of important records about infant deaths.

In many countries, he said, there is a belief, that a stillbirth may not represent a lost life.

Some stillbirths, infant deaths or deaths of mothers result from complications during childbirth, the WHO said. Others may result from health problems with the mother, including diabetes or hypertension.

A poor diet or using drugs can interfere with the growth of a fetus inside the mother, the WHO added.

Lisa Schlein reported this story for VOA News. Bruce Alpert adapted the story and did additional reporting for Learning English. George Grow was the editor.

Here are some suggestions from the U.S. National Institutes of Health on what a pregnant woman can do to improve chances of giving birth to a healthy baby.

solution - n. something that solves a problem

endure - v. to experience pain and or sadness

complication - n. something that makes something harder to understand, explain, or deal with

diabetes - n. a serious disease in which the body cannot properly control the amount of sugar in your blood because it does not have enough insulin