Update Required To play the media you will need to either update your browser to a recent version or update your Flash plugin.
By Caty Weaver
17 January, 2018


Haitian-born film director Robenson Lauvince feels confident about his latest movie. He thinks it will help the Haitian film industry and the community as a whole.

The Miami, Florida, premiere of Married Men follows closely behind President Donald Trump's reported insult of Haiti and other countries. He was said to have used a vulgar term to describe the countries during a meeting with lawmakers at the White House.

Haitian star Junior Rigolo has a small part in Married Men. He spoke during a press conference in Fort Lauderdale the night before the premiere. 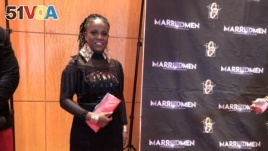 "I don't think it's a black-and-white thing with Trump, it's just how he is," Rigolo said. "So, if you're going to get angry about what Trump said, you've only just begun being mad. It's not going to stop. Every day, there's something new. So, for Haitians - we need to stop going on social media and posting ‘I am Haiti,' because that's just for show. We need to instead mount a movement to show the world who we really are."

Married Men centers around Juno Rene, a therapist. He seems to have the perfect marriage. Then, he meets a woman for whom he is willing to risk everything.

The film features some of Haiti's most popular musicians and actors. Well-known and successful Miami Haitians attended the premier.

"I'm super-duper happy and excited," he told VOA. "I think that what's happening tonight is not only meaningful to me but also to the Haitian movie industry. We need this. Haitian film needs this to move forward."

Lauvince said he was pleased by the Haitian American crowd that stood in line for hours to get tickets to the event. He said he and the audience need each other.

"At the end of the day, this is a Haitian film, and it represents all Haitians who are making movies today and all Haitian movie fans," he said. "I'm glad they are here."

Among the crowd was Miami-Dade County Commissioner Jean Monestime, the first Haitian-American elected to the commission.

He said he puts a lot of responsibility onto Haitian American young people. He noted that they fit easily into American culture and have experienced the good that comes with entrepreneurship.

In his words, "There are more opportunities here in the U.S., so we're counting on them to take Haitians to a higher level in the future."

Athlet St-Fleur, or Flav, is the lead actor in Married Men. It is his first film. But he already knows fame as a lead singer of the popular Haitian Konpa band Gabel.

He says playing Juno was a huge responsibility. He credits his critically praised performance in the movie to the crew that surrounded him.

"The director Robenson did a fantastic job, and also the whole team, Belgamee (productions). I hope people admire the character I play. I think some will hate him, but I hope some will admire him as well. There are a lot of good lessons in the movie, so I think people will receive it well," he told VOA.

"The experience was very different," she said, "because Roby was serious."

Haitian musician J. Perry was also at the event. Hours after the news of Trump's reported statement about Haitians, he went on Instagram. He posted: "Unity is Power. Let's all work together so other countries will stop humiliating us."

He spoke about it at the movie premiere.

"I think what's happening tonight is a great example of what I was talking about in my Instagram post. Look at this amazing Haitian event. This is how Haitians should continue working so that other countries can see what we can do," he said.

He added, "We shouldn't get angry. We need to be the best Haitians we can be around the world."

The Married Men cast received a standing ovation when the movie ended.

Sandra Lemaire wrote this story for VOANews. Caty Weaver adapted it for VOA Learning English. Hai Do was the editor.

vulgar - adj. not having or showing good manners, good taste, or politeness

mount - v. to organize and do (something that usually requires the effort of many people)

admire - v. to feel respect or approval for (someone or something)

ovation - n. an occurrence in which a group of people at a play, speech, sporting event, etc., show enthusiastic approval or appreciation by clapping their hands together over and over