Watching a Film in Your Car, Before the Age of the Small Screen

Update Required To play the media you will need to either update your browser to a recent version or update your Flash plugin.
By VOA
02 December, 2012

From VOA Learning English, welcome to THIS IS AMERICA in Special English. I'm June Simms.

Drive-in movie theaters are considered an American invention. Drive-ins became very popular in the United States after World World Two. They combined two popular loves in America: cars and movies. So why did most of the drive-ins later close? That was a question VOA's Christopher Cruise often wondered about. This week on our program he looks for the answer.

The first drive-in movie theater opened in the United States in 1933. Popular Science magazine described a theater in Camden, New Jersey, as the first of its kind in the word: an open-air movie theater just for motorists. People could watch a film on the big screen while sitting in their car, eating, talking and relaxing.

Many drive-in theaters opened in the 1950s, as the American economy expanded after the war and more people bought cars.

In the 1960s -- when I was a boy -- there were between 4,000 and 6,000 drive-in theaters in the United States. I lived in the northeastern state of Maine. Not a lot of people live there. Yet my parents could take me and my three brothers and two sisters to any of four drive-ins located within an hour's drive of our home. But almost as soon as drive-ins were everywhere, their popularity began to fade. Today, fewer than 400 are still operating in the United States.

April Wright is producing a documentary about drive-in theaters and the special place they held in American culture. The film is called "Going Attractions: The Rise and Fall of the Drive-In as an American Icon." She plans to release it early next year on the eightieth anniversary of the opening of the first drive-in theater.

April Wright visited more than 400 current and former drive-in sites across the country during her research for her film. Drive-ins, she tells me, were "the perfect blend of entertainment and car culture." They represented the hopefulness that followed the war, when the soldiers came home and millions of babies were born.

"So at the time they flourished, it was after the baby boom, and so there was the convergence of a strong economy and lots of kids and car culture -- people being able to afford cars. There wasn't really television at that point in all the homes. And so it was just sort of this thing that families did where they saw their neighbors, where they took their kids. And it was this whole evening out that was very social, very wholesome for the communities, and that's when they started."

So why did drive-ins lose their appeal? April Wright looked for the reason. 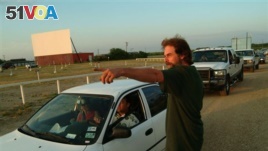 Cars entering the Galaxy Drive-In Theatre in Ennis, Texas
In the 1960s, families were breaking up as the divorce rate rose sharply in the United States. April Wright thinks that is one reason drive-ins closed: A shared family experience like going to a drive-in movie lost some of its appeal.

But another reason many drive-ins closed was their location. Many had been built outside cities on land that at the time was not very valuable.

But as the American population grew, more and more people moved from the cities to the suburbs.

Soon, many drive-in theaters found themselves surrounded by houses and stores rather than by forests or empty land. Now the land was very valuable. Offers from developers to buy the land became hard to resist for the owners. After all, fewer people were going to drive-ins, and property taxes were increasing because the land was now worth more.

Also, in some areas, insects, especially mosquitoes, were a problem. They would fly into open car windows during the movie. Some drive-in theaters sold insect-killing kits. I can tell you from personal experience that these helped, but not much.

In northern areas of the United States, drive-in theaters were open just a few months of the year. In the north, nights can get cold even during the summer. Blankets and portable heaters helped -- but, again, not much.

Even when the drive-ins were open, the theaters often sat unused during daylight hours. Sometimes, the land would be used for open-air markets during the day, but these did not bring a lot of income. What did bring a lot of money in many cases was when the land was sold to build homes, shopping centers and office buildings.

There were other problems for drive-in theaters, especially in the late 1960s. Some of the older theaters were dirty and not well-maintained. The quality of the films declined. And the spread of daylight saving time meant the sun might not set until eight or even nine o'clock. This may have reduced attendance, although some people disagree. But, at the same time, other changes were taking place with popular entertainment. More people were buying color televisions. And more indoor theaters were opening with multiple choices of films.

The 1970s and '80s brought video rentals and cable TV with many choices of channels. Television made it easier, and cheaper, to stay home for entertainment. By the end of the eighties, the number of drive-in theaters had fallen by two-thirds from their peak.

Today, we live in a time of what documentary filmmaker April Wright calls "the individualization of the entertainment experience." There are more choices and more ways than ever to experience entertainment. If you really want to watch a movie in your car, you could watch it on a DVD player or stream video on a mobile device. You don't have to go to a drive-in anymore. But some people still do. 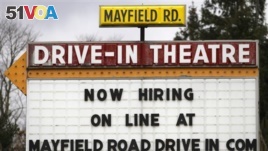 The Mayfield Drive-In movie theater in Chardon, Ohio put up this sign earlier this year
An owners group says 42 new drive-in theaters have been built since the nineteen nineties. And 63 former ones have reopened. But not all the news is good. Some of the new and reopened theaters have since closed.

And another challenge is coming. The movie industry is moving to digital distribution of films to theaters. The cost of having to upgrade to digital equipment may be more than many older, struggling drive-ins can afford.

Many of today's drive-in theaters are owned by families rather than big movie theater companies. In many cases the owners are the children or grandchildren of the first owners. Drive-ins seem to be operated at least as much from a passion to keep them open as a desire for profit. The owners believe the theaters are important to their community.

Earlier this year, Donald Brown purchased the Skowhegan Drive-In in the small town of Skowhegan, Maine. He operated a drive-in theater in the state of Delaware for 14 years. That theater was profitable, he says, and he believes he can make a profit with his new theater by focusing on families. Young people, he says, are not going to see movies at the drive-in anymore. For that, he blames video games, the Internet and mobile phones.

"One of the things that we noticed dramatically beginning in 2005 was the disappearance of the young adult audience that really sustained us through the fall. The films that would attract that audience just did not bring them in after two thousand four and it seemed to correspond with the availability of the electronic media." 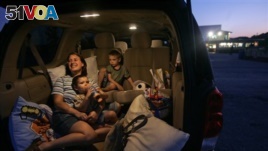 A family watches a movie at the Silver Moon Drive-In theater in Lakeland, Florida
The Skowhegan Drive-In opened in 1954. It has space for three hundred fifty cars. Donald Brown told me he was surprised by the level of reaction in the community when he bought the theater.

"It's astounding. We've really had an outpouring of support on the Facebook page, the website and just while I'm working up there during the day, the number of people who've come in and inquire as to when we're opening -- ‘I hope you're not closing this and redeveloping the land' -- has really been very supportive."
He says it shows that even today, with all the other entertainment choices available, drive-in movie theaters can still be an important focus in the cultural life of a community.
Related Articles
go top