Movie Theaters Return to Kashmir after More Than 30 Years

Update Required To play the media you will need to either update your browser to a recent version or update your Flash plugin.
By Andrew Smith
11 November 2022


Movies have returned to Indian-Administered Kashmir for the first time in almost 33 years.

Theaters were closed January 1, 1990, because of concerns over militant threats against theaters, beauty parlors, and liquor stores. But a new multiplex cinema, INOX Srinagar, opened on September 30.

India and Pakistan dispute who should rule Kashmir. The territory is divided almost in half between the two countries, with military forces on each side. 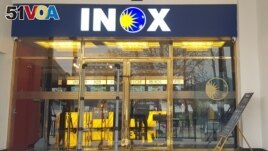 However, the threat of violence remains high for the people who visit the multiplex. Patrons must pass through tight security. Armed police guard the area. Patrons are frisked at the main gate before entering the theater. An armored truck with at least a dozen policemen is stationed near the entry gate, and a security tower stands next to the ticket counter.

The Kashmir Valley had about 15 movie theaters until 1989, when militants, opposed to Indian rule, demanded their closure.

INOX Srinagar is owned by Vikas Dhar's family. The family has owned movie theaters in Srinagar since the 1960s. Dhar told VOA that, for him, the opening of his multiplex is a dream come true.

More than 5,000 patrons visited the 524-seat complex in its first month of operation.

Dhar thinks more people will visit in the future. He said, "It is not a big figure, but it will increase with the passage of time when people will come out of their houses without being afraid of anyone."

He added that the theater might develop restaurants and a play area for children next year.

For the younger generation, going to the movie theater is a new experience. For older people, it is a reminder of times past. But many young people prefer to watch movies at home on large TV screens instead of risking their safety at a theater.

Tayba Gulnar is a 27-year-old lawyer who likes to watch movies at home. "Cinema is a public place and is different from what it used to be 10-15 years ago." She added, "I would only watch an animated movie in cinema, if I ever go there." Cinema is another word for theater.

But Dhar thinks that even younger Kashmiris will enjoy the experience of watching a film in a theater. He said that movies such as Avatar and Avengers with their special effects can only be fully enjoyed on a big screen.

Manmohan Singh Gauri owned the Palladium Cinema in the Kashmir Valley before it closed. Now he hopes to open his own theater if he is granted permission by the government. He said the return of movies to the Kashmir Valley can give younger Kashmiris more information about what is happening around the world.

beauty parlor –n. a term for a store where mainly women go to have their hair, skin or nails treated

patron –n. a person who buys goods or uses the services of a business, library, or similar places

frisk –v. when a security person passes their hands over the body of someone searching for hidden weapons or illegal materials

animated –adj. produced through the process of animation, using individual drawing or images to create a moving image as in a movie