Update Required To play the media you will need to either update your browser to a recent version or update your Flash plugin.
By VOA
29 August, 2014

I'm Caty Weaver. Today we are talking about the 2014 MTV Video Music Awards.

It was a big week for the entertainment industry in the United States. On Monday night the Emmy Awards honored the top stars and projects in television. But the fun really began Sunday when the cable network, MTV, presented its yearly Video Music Awards. Riff Raff and Katy Perry arrive at the MTV Video Music Awards at The Forum on Sunday, Aug. 24, 2014, in Inglewood, Calif. (Photo by Jordan Strauss/Invision/AP)

That event took place in Inglewood, California. And the stars came out for the ceremony. But who stole the show? In other words, which artists got the most praise or attention for his or her attendance or performance? Singer Beyonce was among the best received artists of the night. She closed the show with several hit songs. She got the crowd up on its feet to dance. But, the crowd really loved the appearance of Beyonce's family. Her husband, rapper and producer Jay-Z, and their two-year-old daughter Blue Ivy came to the stage to present the singer with the Michael Jackson Vanguard Award. 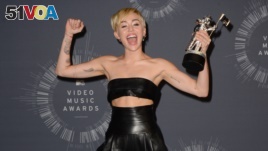 Miley Cyrus poses with the Video of the Year award . (Photo by Jordan Strauss/Invision/AP)

Miley Cyrus also had a good night at the VMAs. Her video for the song "Wrecking Ball" won the top honor, Video of the Year. And industry critics praised her later for the way she accepted the award.

Cyrus brought a young, homeless man to the show as her date. She also asked him to go up on stage to receive her award. Jesse Helt took the moment to appeal for help for homeless children in America. 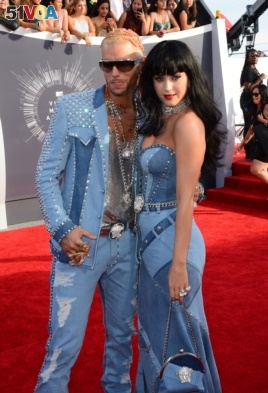 Police are reportedly seeking Mr. Helt for a violating a court order linked to a sentence he received for trespassing.

And, last but not least, Katy Perry has been the subject of much press this week. Everyone was talking about what she wore and whom she brought to the VMAs Sunday. Perry wore a long dress made completely of denim material. And her date, the rapper Riff Raff, wore a denim suit. The couple copied the style of Britney Spears and Justin Timberlake at the American Music Awards in 2001.

Perry tweeted to Spears about her look for the show. Spears tweeted back with praise. "You looked amazing tonight," she wrote.

Britney Spears was not the only one pleased with Katy Perry Sunday night. Perry's "Dark Horse" won Best Female Video.

So, did you see the clothing Katy Perry and Riff Raff wore to the VMAs? What did you think? Would you wear denim to an important event? Let us know, and practice your English writing skills, in the comment section below! We will let you know how you did.