Update Required To play the media you will need to either update your browser to a recent version or update your Flash plugin.
By Hai Do
18 April, 2019


The United States Attorney General William Barr released most of a special government report on Russian interference in the 2016 presidential election Thursday.

The report from Special Counsel Robert Mueller said that "while this report does not conclude that the President committed a crime, it also does not exonerate him" on the issue of obstruction of justice.

The report also found there were many contacts between the Trump campaign and Russia. But, it said, "...the evidence was not sufficient to support criminal charges."

During the Thursday morning event with wounded military veterans, President Donald Trump said, "I'm having a good day." He declared, "It's called no collusion, no obstruction."

The Mueller report said the president's efforts to influence the investigation were mostly unsuccessful, "largely because the persons who surrounded the President declined to carry out orders or accede to his requests." 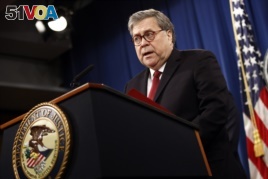 Attorney General William Barr speaks about the release of a redacted version of special counsel Robert Mueller's report during a news conference, Thursday, April 18, 2019, at the Department of Justice in Washington. (AP Photo/Patrick Semansky)

Barr read a statement and answered questions from reporters shortly before he ordered the release of the 448-page, redacted report Thursday. He said the "redactions" are needed to protect grand jury information, intelligence secrets, ongoing investigations and the privacy rights of others. The attorney general added that a report with fewer redactions will be made available to a small group of Congressional leaders.

Democratic Congressman Jerry Nadler of New York is the chairman of the House Judiciary Committee. He called Barr's decision to withhold the full report "regrettable."

Nadler said in a statement, "The report concluded there was ‘substantial evidence' that President Trump attempted to prevent an investigation into his campaign and his own conduct." He then asked for Mueller to testify before Congress by May 23.

Robert Mueller was named special counsel on May 17, 2017 to investigate "Russian government efforts to influence the 2016 election and related matters." The appointment came after Trump had dismissed Federal Bureau of Investigation Director James Comey and told Russian officials that the pressure had been "taken off."

The report said that, when Trump learned of the appointment, he said, "This is the end of my Presidency."

The report examined 11 actions by the president related to the obstruction of justice investigation.

Trump was said to be concern that the Russian interference investigation might lead the public to question the legitimacy of his election.

It said the president directed White House lawyer Don McGahn to dismiss Mueller but he refused. The president then pressured McGahn to deny news reports about it.

News reports of a meeting at Trump Tower in New York City on June 2016 became known in the summer of 2017. The report said that, when the report became known, Trump directed his staff to say the meeting was about adoptions of Russian children. The meeting, attended by his son and top campaign officials, was to receive damaging information about the presidential campaign of Hillary Clinton.

Trump declined to answer questions from the special counsel in person. Instead, he provided written answers in November 2018. The report said, "...the President stated on more than 30 occasions that he ‘does not recall' or ‘remember' or have an ‘independent recollection' of information called for by the questions."

Trump denied any knowledge of the Trump Tower meeting before it took place. He said his claim that he hoped Russia would find missing Clinton emails was not serious.

The president's lawyers have also claimed that the president is not subject to obstruction of justice laws because of his constitutional position as head of the Executive branch.

Mueller, however, said in the report that "Congress has authority to prohibit a President's corrupt use of his authority in order to protect the integrity of the administration of justice."

Attorney General Barr has already agreed to appear before Congressional committees to talk about the report.

Hai Do wrote this story for Learning English. Mario Ritter was the editor.

exonerate –v. to prove that someone is not guilty of something

obstruction –n. the act of blocking something

collusion –n. a secret cooperation for an illegal or dishonest purpose

accede –v. to agree to a demand

redact –v. to edit or prepare writing so it is ready for the public

legitimacy –n. permitted or acceptable under the law

authority –n. the power to give orders or make decisions

integrity –n. the quality of being honest and fair