Update Required To play the media you will need to either update your browser to a recent version or update your Flash plugin.
By Mario Ritter
17 November, 2017


Zimbabwe's President Robert Mugabe made his first public appearance since the military placed him under house arrest this week.

The military, however, has announced "significant progress" on talks aimed at having Mugabe step down.

Zimbabwe's military continues to show respect for the 93-year-old leader by referring to him as the president and the commander-in-chief. Mugabe is the world's oldest head of state.

However, the military said Friday it was arresting or seeking the arrest of some people close to Mugabe and his wife.

During the ceremony on Friday, Mugabe wore an academic gown and hat. He walked slowly to a podium, and he joined the crowd singing the national anthem and opened the ceremony. But he did not make a speech. 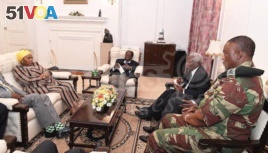 The state-run Herald newspaper and Zimbabwe Broadcasting Corporation said military leaders are "engaging with the Commander-in-Chief President Robert Mugabe on the way forward and will advise the nation of the outcome as soon as possible."

Negotiations appear to be seeking to get Mugabe to agree to hand over power to a new government. But, timing the process may be difficult. The ruling ZANU-PF party is to meet next month. Mugabe's term as president ends next year, but an election date has not been set.

The statement from the military said it had made progress "to weed out criminals around President Mugabe."

The military is seeking to remove Cabinet ministers and other top officials associated with first lady Grace Mugabe.

The military action follows Mugabe's dismissal of Vice President Emmerson Mnangagwa. The dismissal appeared to position Mugabe's wife, Grace, as the next leader.

The first lady was not seen at the graduation ceremony Friday.

Little public reaction has been reported. Zimbabweans went about their daily business as soldiers and armored vehicles continued to patrol the capital, Harare.

Headlines in some of Zimbabwe's newspapers declared the Mugabe era over. "Dawn of a new era," one said. "Mugabe remembered for brutal 37-year rule," said another.

Hai Do adapted this story for VOA Learning English from an AP story. Mario Ritter was the editor.

house arrest –n. to be detained by officials in one's own home

podium –n. a small stand from which people give speeches

weed out –v. to selectively remove