They Remember Muhammad Ali in Louisville

Update Required To play the media you will need to either update your browser to a recent version or update your Flash plugin.
By Dan Friedell
09 June, 2016


Marjorie Huffman was born in Louisville, Kentucky in 1937. She grew up with a little boy named Cassius Clay — the champion boxer who later changed his name to Muhammad Ali.

This week, old friends such as Huffman are remembering Ali. He died June 3 at 74 years old. He will be buried June 10 in his hometown of Louisville, Kentucky after a public service at a basketball arena. Thousands of people are expected to attend the memorial events.

Huffman remembers playing ball games with Ali, his brother and all the other children in the neighborhood. Huffman says she and the other neighbors used to laugh when Ali, as a child, said he would be the greatest boxer in the world.

"He always said that he was going to be the champ," Huffman says. "And you know how people say things when they're children? And we laughed."

Of course, Ali did become the champ. He won a gold medal at the Olympic Games in 1960. He then became the heavyweight boxing champion when he defeated Sonny Liston in 1964.

Ali went on to win 56 professional boxing matches. He held a number of different titles until he lost to Larry Holmes in 1980. He retired from boxing in 1981.

Huffman says the neighborhood where she and Ali grew up has changed over the years. It is not as nice as it used to be. 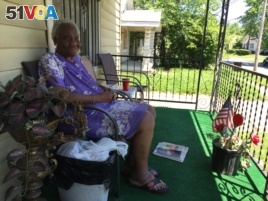 Marjorie Huffman grew up down the street from Muhammad Ali in Louisville, Kentucky.

"You could go away, and stay two or three months, leave your doors open, and nobody would bother nothing."

Ali's home was renovated and opened as a museum in late May. It is pink and has two bedrooms. It is an important gathering point for people in the neighborhood since Ali died.

Chris Forehand is a rapper and a minister. He came by one day to honor the champ. He remembers the times Ali returned to Louisville after becoming famous as a boxer. Forehand says Ali passed out Qurans to the adults and popsicles to the kids.

Once, Ali bought chicken wings for Forehand and a friend.

"The greatest of all times ended up buying us some chicken wings," Forehand says. "It was amazing."

Mark Stumpley was also at Ali's old house. He said he once met the boxer at a wedding in Chicago.

"He gave you power just by being in his presence."

Stumpley says Ali's greatest achievement was not winning the boxing championships, even though that is what made him famous. It was making a life for himself after growing up in a poor neighborhood in Louisville.

"He said, 'I'm going to create my world, I'm going to put this together based on who I am, and what I love to do, and create my life and world from that.'"

Stumpley said Ali's attitude inspired him to do the same thing with his life.

Ramon Taylor wrote this story for VOANews. Dan Friedell adapted it for Learning English. Kelly Jean Kelly was the editor.

How do you remember Muhammad Ali? We want to know. Write to us in the Comments section and on 51VOA.COM.

renovate – v. to make changes and repairs to (an old house, building, room, etc.) so that it is back in good condition