Update Required To play the media you will need to either update your browser to a recent version or update your Flash plugin.
By VOA
13 December, 2013

Hello again and welcome back. This is As It Is from VOA Learning English. I'm June Simms in Washington.

Music piracy is a big problem in Malawi. Today Mario Ritter tells what some artists are doing to deal with the problem.

But first, we hear about some of the issues affecting Muslim performers in the United States.

Muslim performers represent only a small minority of the United States entertainment industry. Those who openly proclaim their religion are an even rarer find. Many of them are trying to use their talent to discredit negative ideas about Muslims. Several showed their work at a recent gathering of American Muslims in Los Angeles.

Dean Obeidallah is not just an American comedian.

"My ethnicity and my faith make me a little different than many other comedians."

He is a Muslim with Palestinian roots. He says his identity has not created barriers for him. But he says stereotypes about what he represents do exist in the United States.

Obeidallah uses comedy to talk about some of these misunderstandings about what it means to be Muslim. He has co-directed a comedy documentary called "The Muslims Are Coming!"

Obeidallah says he has received positive reviews from both Muslims and non-Muslims. But, he says sometimes non-Muslims do not know how to react to his jokes.

"Some things I say they are not politically correct. They are not fashioned and perfected in a political kind of way. And so some people say we don't want you to say this or we don't want you to say that as a Muslim person. When you are an artist or a public figure many times you automatically become a spokesperson for millions of people. All these people have different points of view and different ways that they want to be portrayed, but every artist can't be responsible for everyone."

"So I'm sure there are some walls or hurdles because I'm Muslim, or because I'm black, or because of the type of things I talk about. But the most important thing is for me to be sincere and heartfelt and from that it always works."

Singing from her heart has worked very well for Yuna, the first artist from Malaysia to break into the United States market. Abeer Khan is a fan. But she says some Muslims will not be able to accept a Muslim woman as a performer.

"I think it's something so new that it's going to take time for people to fully understand it, maybe come to grasp that there are very talented Muslim women out there. So she's a trailblazer and that's what we need."

Whether it is through music, poetry or comedy, Dean Obeidallah says it is important for Muslim artists and entertainers to appear in the United States media.

"In the United States, only one to two percent of the country is Muslim. We can't reach the other 98% unless we go in mainstream media."

He says the more visible Muslim artists are, the more they will be able to change anti-Islamic beliefs and stereotypes.

Thanks to VOA's Elizabeth Lee for her reporting on this story. I'm June Simms and you are listening to As It Is.

Malawi Performers Forced to Sell Their Own Music 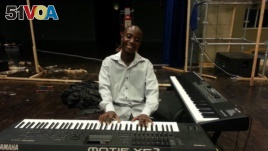 Gospel artist Thocco Katimba now sells his own music. (Photo courtesy of Thocco Katimba)
Music piracy is a big problem in Malawi. As a result, more and more musicians in Malawi are taking their products directly to the street to cut out the middle man. City officials, however, are expressing concern about noise pollution as the musicians use loudspeakers to advertise their music. Mario Ritter has more.

Many musicians in Malawi are living far below their fame. Although their music is enjoying widespread airplay on radio stations and in dance clubs, the artists are not earning very much money for their work. So says gospel artist Thocco Katimba.

"The main problem here in Malawi is piracy. Honestly, it has been a very tough journey for us, the musicians. Because one comes up with a very good album, you will find that it is almost everywhere in the country and the neighboring countries. But you look at yourself -- what have you achieved by doing that, you will find that it's literally nothing."

The musicians blame music suppliers who sell music for the artists. They accuse the distributors of making copies of the music for personal gain. The distributors have denied the accusations.

Thocco Katimba has cut ties with the distributors and is going into the street to sell his own music. Musician Lloyd Phiri has done the same.

"Basically I would say I have sold around 17,000 CDs from the new album. Whilst previously I was selling like two thousand copies and I was not getting the monies, cash. It is like these vendors were making more copies, selling them. If I go to them they would say, ‘ah no, tomorrow, bra, bra, bra.' This time around to be precise, we are making money."

Officials of the Copyright Society of Malawi, or COSOMA, say the musicians risk being charged and fined because they do not put copyright stickers on their products. COSOMA says this violates the 1989 Copyright Act.

"They want money, simple. Because if they put their hologram on our music, it's like we are telling them to go out and protect our music but basically I haven't enjoyed their services to be precise."

City officials also accuse the musicians of violating laws on noise pollution. They say business operators have complained about the use of loudspeakers along city streets.

Critics say city officials are likely to lose the battle against noise pollution. They say the laws do not establish specific sound level limits for different areas.

Matini-Nkhoma also told VOA that the city council does not have equipment to measure sound levels. He says this will likely affect the government's ability to enforce the laws on noise pollution. I'm Mario Ritter.

And I'm June Simms. That is As It Is. Have a question or comment about this show? We would love to hear from you. Email us at learningenglish@voanews.com.

VOA world news is coming up at the beginning of the hour, Universal Time.