'The Murders in the Rue Morgue,' by Edgar Allen Poe, Part Three

Update Required To play the media you will need to either update your browser to a recent version or update your Flash plugin.
By VOA
23 April 2021


We present the third of five parts of the short story "The Murders in the Rue Morgue," by Edgar Allen Poe. The story was originally adapted and recorded by VOA Learning English.

My housemate in Paris, August Dupin, was an interesting young man with a busy, forceful mind. This mind could, it seemed, look right through a man's body into his deepest soul.

After reading in the newspaper about the terrible murder of a woman and her daughter, Dupin was consumed with the mystery. He questioned the ability of the Paris police to solve the crime. I told Dupin that it seemed to me that it was not possible to explain the strange details surrounding the killings. 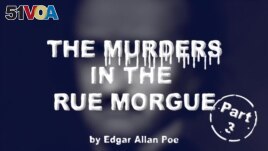 The Murders in the Rue Morgue by Edgar Allan Poe, Part Three

"No, no. I think you are wrong. A mystery it is, yes. But there must be an answer. There must! Let us go to the house where it happened and see what we can see. I know the head of the police, and he will permit our visit. It will be interesting and give us some pleasure."

I thought it strange that Dupin thought the activity would give us pleasure. But I said nothing.

It was late in the afternoon when we reached the house on the Rue Morgue. It was easily found, for there were still many persons — in fact, a crowd, standing there looking at it. Before going in, we walked all around it, and Dupin carefully looked at the neighboring houses as well. I could not understand the reason for such great care.

Finally, we entered the house. We went up the stairs to the room where the daughter's body was found. Both bodies were in the room now. The police had left the room as they had found it in every other way. I saw nothing beyond what the newspaper had told us.

Dupin looked with great care at everything, at the bodies, the walls, the fireplace, the windows. Then we went home. Dupin said nothing. I could see the cold look in his eyes, which told me that his mind was working, working busily, quickly.

Dupin said nothing about our exploration until the next morning when he suddenly asked me a question.

"Did you not notice something especially strange about what we saw at the house on the Rue Morgue?"

"Nothing more than what we both read in the newspaper, which was unusual indeed. How shall we explain the horrible force, the unusual strength used in these murders? And whose were the voices that were heard? No one was found except the dead women; yet there was no way for anyone to escape. And the wild condition of the room; the body which was found head-down in the chimney; the terrible broken appearance of the body of the old lady, with its head cut off-- these are all so far from what might be expected that the police are standing still; they don't know where to begin."

I was so surprised that I could not say a word. Dupin looked quickly at the door.

"I am now waiting for a person who will know something about these murders, these wild killings. I do not think he did them himself. But I think he will know the killer. I hope I am right about this. If I am, then I expect to find the whole answer, today. I expect the man here — in this room — at any moment. It is true that he may not come, but he probably will."

"But who is this person? How did you find him?"

"I'll tell you. While we wait for this man we do not know — for I have never met him — while we wait, I will tell you how my thoughts went."

Dupin began to talk. But it did not seem that he was trying to explain to me what he had thought. It seemed that he was talking to himself. He looked not at me, but at the wall.

"It has been fully proved that the voices heard by the neighbors were not the voices of the women who were killed. Someone else was in the room. It is therefore certain that the old woman did not first kill her daughter and then kill herself. She would not have been strong enough to put her daughter's body where it was found. And the manner of the old lady's death shows that she could not have caused it herself. A person can kill himself with a knife, yes. But he surely cannot cut his own head almost off, then drop the knife on the floor and jump out the window. It was murder, then, done by some third person — or persons. And the voices heard were the voices of these persons. Let us now think carefully about the things people said about those voices. Did you notice anything especially strange in what was told about them?"

"Well, yes. Everybody agreed that the low voice was the voice of a Frenchman, but they could not agree about the high voice."

"Ah! That was what they said, yes, but that was not what was so strange about what they said. You say you have noticed nothing that makes their stories very different from what might have been expected. Yet there was something. All these persons, as you say, agreed about the low voice, but not about the high hard voice. The strange thing here is that when an Italian, an Englishman, a Spaniard, and a Frenchman tried to tell what the voice was like, each one said it sounded like the voice of a foreigner. How strangely unusual that voice really must have been! Here are four men from four big countries, and not one of them could understand what the voice said; each one gave it a different name.

"Now, I know that there are other countries in the world. You will say that perhaps it was the voice of someone from one of those other lands — Russia, perhaps. But remember, not one of these people heard anything that sounded like a separate word.

Here, Dupin turned and looked into my eyes.

"This is what we have learned from the newspaper. I don't know what I have led you to think. But I believe that in this much of the story there are enough facts to lead us in the one and only direction to the right answer. What this answer is, I will not say...not yet. But I want you to keep in mind that this much was enough to tell me what I must look for when we were in that house on the Rue Morgue. And I found it!

"What did I first look for? The path of escape, of course. I mean, we agree the killers were not ghosts; they could not move through walls. So, how did they escape?

"At first I saw no way out. It had been necessary for the neighbors to break down the door in order to enter the room. There was no other door. The opening above the fireplace is too narrow for even a child to go through. That leaves only the windows. We must make that exit somehow possible.

"Remember, there are two windows in the room. Both of them, you will remember, are made of two parts; to open the window one must lift up the bottom half. One of these windows is easily seen; the lower part of the other is out of sight behind the big bed. I looked carefully at the first of these windows. It was firmly closed, fastened, like the door, on the inside. To keep the window closed, to fasten it, someone had put a strong iron nail into the wood at the side of the window in such a way that the window could not be raised. At least it seemed that the nail held the window closed. The nail was easy to see. There it was. And the people who discovered the killings used their greatest strength and could not raise the window. I, too, tried to raise the window and could not.

"I went to the second window and looked behind the bed at the lower half of the window. There was a nail here, too, which held the window closed. Without moving the bed, I tried to open this window also, and again I could not do so. But I did not stop looking for an answer there."

housemate – n. a person who lives in the same house with another person but is not a part of that person's family

consume(d) – v. to take all of a person's attention, energy or time

neighboring – adj. near or next to something or someone

certain – adj. used with it to say that something is known to be true or correct

notice – v. to become aware of something or someone by seeing or hearing it

perhaps – adv. possibly but not certainly

ghost(s) – n. the soul of a dead person thought of as living in an unseen world or as appearing to living people

fasten(ed) – v. to attach something or join two things or two parts of something especially by using a pin, nail or something else

nail – n. a long, thin piece of metal that is sharp at one end and flat at the other end and that is used chiefly to attach things to wood