'The Murders in the Rue Morgue,' by Edgar Allen Poe, Part Two

Update Required To play the media you will need to either update your browser to a recent version or update your Flash plugin.
By VOA
16 April 2021


We present the second of five parts of the short story "The Murders in the Rue Morgue," by Edgar Allen Poe. The story was originally adapted and recorded by VOA Learning English.

It was in Paris in the summer of 1840 that I met August Dupin.

Dupin was a strangely interesting young man with a busy, forceful mind. He seemed to look right through a person and uncover their deepest thoughts. Sometimes Dupin seemed to be not one, but two people — one who coldly put things together, and another who just as coldly took them apart. One morning, in the heat of the summer, Dupin showed me once again his special mental power. 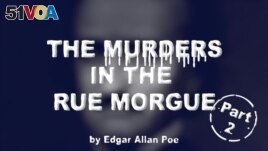 The Murders in the Rue Morgue by Edgar Allan Poe, Part Two

We read in the newspaper about a terrible killing. An old woman and her daughter, living alone in an old house in the Rue Morgue, had been killed in the middle of the night.

The story in the paper went:

Paris, July 7, 1840 -- Early this morning, cries of terror were heard in the western part of the city. They reportedly came from a house on the Rue Morgue, in which the only occupants were a Mrs. L'Espanaye, and her daughter Camille.

Several neighbors and a policeman ran to the house. By the time they reached it, the cries had stopped. They forced the door open.

As they entered, they heard two voices, apparently from above. The group searched but found nothing until the fourth floor. There, they came to a door, locked from the inside. Quickly they forced it open. Before them was a bloody horror scene!

The room was in total disorder — broken chairs and tables and the mattress pulled from the bed. Blood was everywhere; on the walls, the floor, the bed. A sharp knife lay on the floor in a pool of blood. In front of the fireplace was a clump of long gray hair, also bloodied; it seemed to have been pulled straight out of a head. On the floor were four pieces of gold, an earring, several silver objects, and two bags containing a large amount of money in gold. Clothes had been thrown around the room. A lock box was found left open with just a few old letters and papers inside.

There was no one there. But, when the group inspected the fireplace, they discovered another horror. A still-warm body had been forced up the chimney. It was the old woman's daughter.

There was blood on the face, and dark, deep finger marks on the neck, suggesting a strangling.

After searching the house thoroughly, the group went outside. They found the body of the old woman behind the building. Her neck had been cut so severely that when they tried to lift the body, the head fell off.

The next day the newspaper offered to its readers these new facts:

Paris, July 8, 1840-- The police have questioned many people about the vicious murders in the old house on the Rue Morgue. But none of the answers revealed the identity of the killers.

Pauline Dubourg, a washwoman, said she has known both of the victims for more than three years, and washed their clothes. She said the two seemed to love each other dearly. They always paid her well. She did not know where their money came from, she said. She never met anyone in the house. Only the two women lived on the fourth floor.

Pierre Moreau, a shopkeeper, said Mrs. L'Espanaye had bought food at his shop for almost four years. She owned the house and had lived in it for more than six years. He never saw anyone enter the door except the old lady and her daughter, and a doctor eight or ten times, perhaps.

Many other persons, neighbors, said the same thing. Almost no one ever went into the house. Mrs. L'Espanaye and her daughter were not often seen.

Banker Jules Mignaud said that Mrs. L'Espanaye had put money in his bank, beginning eight years before. Three days before the killings, she withdrew a large amount in gold. A man from the bank carried it to her house for her.

Isidore Muset, a policeman, said that he was with the group that first entered the house. While he was going up the stairs, he heard two voices, one low and soft, and one hard, high, and very strange — the voice of someone who was surely not French, the voice of a foreigner, maybe Spanish.

It was not a woman's voice, he said, although he could not understand what it said. But the other voice, said softly, in French, "My God!"

Alfonso Garcia, who is Spanish and lives on the Rue Morgue, says he entered the house but did not go up the stairs. A nervous man, he was afraid he might be sick. He heard the voices. He believes the high voice was not that of a Frenchman. Perhaps it was English; but he said he doesn't understand English, so he is not sure.

William Bird, an Englishman who has lived in Paris for two years, also entered the house. He said the low voice was that of a Frenchman, he was sure, because he heard it say, in French, "My God!"

The high voice was very loud, he said. He is sure it was not the voice of an Englishman, nor the voice of a Frenchman. It seemed to be that of an Italian, a language he does not understand. He said it might have been a woman's voice.

Mr. Alberto Montani, an Italian, was passing the house at the time of the cries. He said the screams lasted for about two minutes. Montani, who speaks Spanish but not French, says that he also heard two voices. He thought both voices were French. But he could not understand any of the words spoken.

They said that the chimney opening is too small for escape that way. It took four or five people to pull the daughter's body out of the chimney. It was four or five minutes from the time they heard the voices to the moment they entered the room.

Paul Dumas, a doctor, says that he was called to inspect the bodies soon after they were found. They were in a horrible condition, badly marked and broken. He said only a man could have caused such injury. The daughter had been strangled, he said.

When we had finished reading the newspaper's report of the murders, we were quiet for a while. Dupin had that cold, empty look that I know means his mind is working busily. He asked me what I thought of the crime. I said I considered it a mystery with no answer.

Now it's your turn to use the words in this story. Have you ever heard of a terrible crime happening in your city or town? Were the police able to solve it? Let us know in the comments section or on our 51VOA.COM.

lock(ed) – v. to fasten something with a lock

scene – n. the place or event of an action

mattress – n. a cloth case that is filled with material and used as a bed

clump – n. a small ball or mass of something

earring - n. a piece of jewelry that is worn on the ear and especially on the earlobe

lock box – n. a box that locks, usually for storing money or valuables

fireplace – n. a specially built place in a room where a fire can be built

chimney – n. a part of a building through which smoke rises into the outside air

strangling – gerund. the killing of a person or animal by squeezing the throat

reveal(ed) – v. to make something known

shopkeeper – n. someone who owns or manages a shop or store

stairs – n. a series of steps that go from one level or floor to another

stairway – n. a set of stairs that go from one level or floor to another