Update Required To play the media you will need to either update your browser to a recent version or update your Flash plugin.
By Hai Do
12 October 2022


The Rosetta Stone is the star of a new show opening Thursday at the British Museum in London. The exhibition opening marks the 200th year since the mystery around the ancient carvings on the stone was solved.

The British Museum is under increasing pressure to give the stone back to Egypt. Thousands of archeologists and supporters there again demanded its return just last week.

French troops found the stone in the walls of an Egyptian fort in 1799, near Rosetta, a town about 55 kilometers from Alexandria. They gave it to British forces as part of a surrender agreement. The British Museum has held it since 1802. 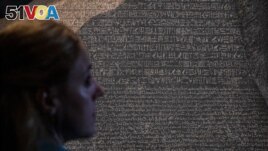 A member of the British Museum staff looks at the Rosetta Stone on Oct. 11, 2022, displayed for the exhibition "Hieroglyphs: Unlocking Ancient Egypt," which runs at the London museum Oct. 13 through Feb. 19, 2023. (Photo by CARLOS JASSO / AFP)

The stone dates back about 2,400 years. It contains the same writing in three languages: hieroglyphs, an ancient Egyptian language called Demotic and ancient Greek.

When it was discovered, nobody knew how to read hieroglyphs.

Thomas Young of Britain and then Jean-Francois Champollion of France decoded their meaning in 1822. They found that the writing came from clergy to mark the reign of the Egyptian king Ptolemy V.

More importantly, the writing on the stone was an important clue that helped experts learned to read Egyptian hieroglyphs, a writing system that used pictures and symbols.

"We decided because the Rosetta Stone was such an important key to that decipherment that we will do this properly: with an exhibition that also features our star objects," said Ilona Regulski, head of Egyptian written culture at the museum. "It's a wonderful moment to celebrate," she added.

Yet the exhibition is under dispute.

Egyptian archaeologist and former antiquities minister Zahi Hawass recently called for the return of the stone and other foreign-held treasures he called "stolen."

The British Museum told AFP that Egypt has never made an official request for the Rosetta Stone's return. Regulski called the stone a "universal object" and said "it doesn't really matter where it is, as long as it's available to people."

The exhibition Hieroglyphs: Unlocking Ancient Egypt will run through February 19 of next year. It explores how hieroglyphs disappeared after Egyptians developed other forms of writing.

Hai Do adapted this story for Learning English based on reporting from Agence France-Presse and British Museum.

decode - v. to understand the true or hidden meaning

reign - n. the period of time during which a king, queen, etc... is the ruler

properly - adv. in a way that is acceptable